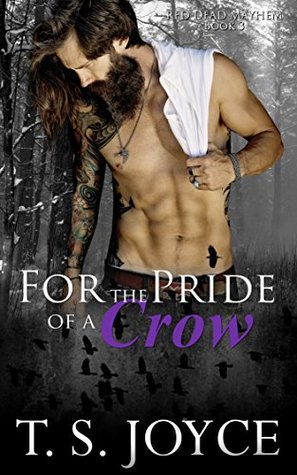 Ethan Blackwood has a dark destiny that will make him the next Blackwood Crow. He’s being haunted by his past and is slowly morphing into the man he never wanted to be. Every decision he’s made to get to this point in his life has been a misstep, and he’s desperate to get turned in the right direction before it’s too late. He doesn’t know how, until he runs into a clumsy little beauty who has decided he is hers, and she is his. What he needs to do is stay steady and figure out a way to get rid of the ghost from his past, but Leah is making it hard to think straight. But the closer she gets to him, the more danger she’s in, because the ghost from his past will do anything to keep Ethan’s destiny intact—even hurt the girl he’s falling for.

Leah Hawthorne isn’t great at many things, but she can tell when a man is good or bad, and Ethan Blackwood is a bad boy with a heart of gold. He’s crazy. Everyone in town knows that much. He talks to himself too much to be sane, but she’s up for being his friend. And the more she gets to know him, the more she thinks he might just be the man to handle her quirks. But he’s a slippery little fish and hard to catch, and now she’s thinking he isn’t as crazy as everyone thinks. Choosing him means putting her life in peril, and there is no doubt her future will be changed forever, but maybe that’s just what this bored, small-town girl needs…a little danger and a lot of love for one hot-as-hell, Harley riding, outlaw Blackwood Crow.

For the Pride of a Crow brings us Ethan’s story.  Ethan is broken in ways that Ramsey and Rike weren’t… maybe in a way he’s even more broken by his father’s actions.  He’s just about at that final breaking point when he meets Leah.  One bumbling, accident prone, nonstop talking waitress who isn’t the least bit afraid of him, and can certainly take him on any day of the week.  Leah is light to Ethan’s darkness, and maybe together they can make him somewhat whole again.  But first they have to get rid of a ghost who just doesn’t know he’s dead but not gone.  This time it’s Ethan who is going to hold on tight for the ride of  his life.  He’s been convinced there is nothing worthy or lovable about him – he’s about to discover what one woman in love can do.

If you’ve read T.S. Joyce’s set of series that make up Damon’s Mountains then you’ll know Willa.  In many ways Leah reminds me of Willa.  She’s outspoken, has no freaking filter whatsoever, talks nonsense that actually makes sense, stands down to no one, is the baddest of the bad-asses when needed and her loyalty is unquestionable.  Yeah, Leah reminds me of Willa…. bet they’d be something if ever in the same book, the same scenes.  (Laughs out loud)

Ethan and Leah work, maybe because they’re totally opposites, maybe because they’re mates… but this odd couple is a total unit and sexy as possible.  Ethan has a lot to get through, and without Leah in his life, well, everything could have turned out so differently.  We get the chance to catch up with old friends, meet a new one and take the ride of our lives with this couple.  I loved For the Pride of a Crow, and I’m betting if you love Shifter Romance then you will, too.