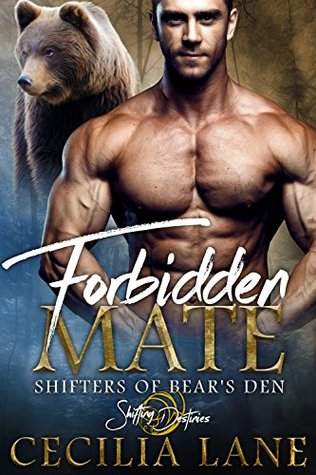 Since it’s a cold, icy, snowy, blizzard-like day outside my patio doors right now I figured this is the perfect time to do some binge reading and get myself caught up on the Shifting Destinies world.  There’s no way I’m stepping outside those doors unless I have no other choice.  I’ve already gotten started on the second series in this world – so I need to listen to my own words and go back to the beginning and get caught up.

“Forbidden Mate” is an intriguing story that easily drew me into a world of magic, fae, vampires… but mostly shifters.  There is world building in this first story, there has to be in order to make sense of this diverse world.  Yet the information needed to understand why Bearden even exists is easily caught up in the telling of Callum and Leah’s story through dialogue and narrative.  There is not what I would consider an information dump and then moving on with the story… but there is a lot of magic, history, tradition, and danger to this world, so there is often a lot to take in.  I was quite comfortable here and I’m anxious to learn more about this magical place that is hidden from human eyes, for the most part.

The cover description provides everything you’d need to know to take a chance on “Forbidden Mate”.  What it doesn’t tell you is how easily you’ll “get” this world and its hidden dangers.  Callum is a strong character with such heavy burdens on his shoulders right now.  Probably the last thing he needed was for a human to discover his enclave, but since she did, due in part to one out of control shifter’s actions now he has to make sure that she stays.  Staying is not something Leah does easily, or ever.  I liked both Callum and Leah, but I do have to admit that Leah had to prove herself to me on more than one occasion.  I understood why she acts as she does, but there were moments when her decisions were frustrating to me… and certainly to Callum.

We will meet most of Callum’s clan in this first story.  Enough to have a feel for these men, but the main focus is Callum’s difficulties in a shift of power, keeping an out of control shifter in line and figuring out what to do with a woman he’s sure is his mate, but she’s also trouble in one feisty, beautiful package.  There is a villain to loathe, fast-paced actions, steamy moments, some chuckles and some bad decisions made.  It all flows together in a story that captured my attention, kept me engaged and wanting more from this small, hidden, magical town.  Now I’m officially hooked and I’ll be enjoying myself with the rest of this series.  I love binge reading, where I can immerse myself in a world without a break.  I would not hesitate to recommend “Forbidden Mate” to any Paranormal Romance or Shifter Romance reader who enjoys a really good story, likable, believable characters, danger, mystery and the sweet joy of falling in love.  I had a very good time in this world, and I’m looking forward to returning.