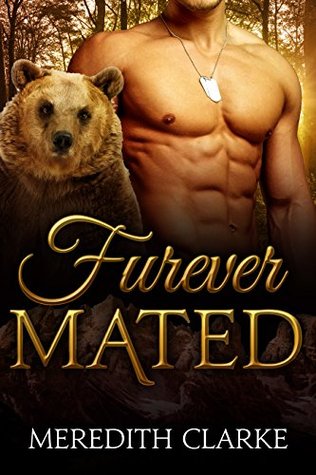 Furever Mated is a quick read with an unusual bit of shifter lore.  I enjoy different tidbits of lore added to stories, each author has their own slant or even several different bits of lore in their series.  It simply makes the whole Shifter genre more interesting to me.  While there is no official series name, there is at least one other connecting story Furever Mine which I had started to read only to realize that something came before.  And as I listen to my own advice, I went looking for the beginning.

Scarlett has had it with her current boyfriend, if you can call him that.  Her interest is obviously greater than his since once again he’s left her at the restaurant while he claims to be at work – with partying noise in the background.  She broke things off and her group of friends took her on a girls vacation… only there were men or shifters involved in that vacation.

Kurt is the alpha of his clan, and a very grumpy, unhappy alpha at that.  A lot has changed since he and the men in his clan first agreed to the military’s genetic changes.  Now that the military no longer wants them around, and the program has been ousted he and his men find themselves in isolated areas making finding their true mates a bit difficult.  Although Kurt has no interest in a mate, he lost his true love years ago in a tragic accident and no one could possibly take her place in his heart.  Until he’s shanghaied by his clan to head to Bear Ridge Resort – a meeting place, island really, where shifter males and human women meet up with the possibility of discovering one’s true mate is the lure.

Kurt and Scarlett’s romance is full of surprises, sexy moments and the realization that there is someone perfect out there for everyone.  A bit of drama makes this story interesting.  And the resort leaves open all sorts of possibilities for the future.  I enjoyed Furever Mated very much and would recommend it for any Shifter Romance or Paranormal Romance reader.  This story stops at about the 49% mark on the Kindle and another story (which I did not read) is offered.