Furever Ours by Meredith Clarke 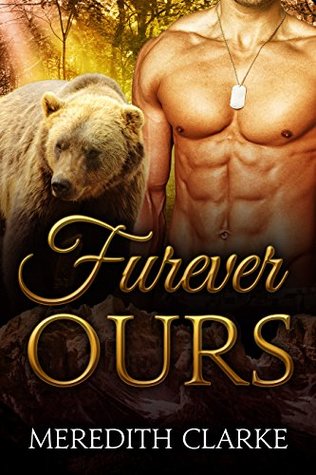 Reid McAllister has lost everything.

After leaving his high school sweetheart, Aria, to go to the Army, he promised that they would still be together. But once Reid is turned into a bear shifter he decides to push Aria away, believing that is what is best for her.

Aria Smith has tried her best to get over Reid. After years of bad dates, she decides to spend her summer vacation at Bear Ridge Resort and to once and for all get Reid out of her thoughts.

When Reid and Aria run into each other at Bear Ridge Resort, all of their old emotions for one another come flooding back. Will Aria accept Reid now that she knows what truly happened to him? Or will Reid be the one that ruins their second chance at happily ever after?

Titles in the Furever series include:  Furever Mated – Furever Mine – Furever Yours – Furever Ours

Reid and Aria’s story has heartache in it, and is proof that when two people who love each other don’t talk to each other the result is nothing less than heartache and anger.  They were two young adults about to embark on college and their future… until Reid made a decision without telling Aria.  One that he would soon regret but family obligation kept him committed to seeing through.  Their letters got fewer, time apart became longer until when Reid made the choice to be a part of the military’s secret super soldier program his letters to Aria simply stopped.  he’d become something that he believed she could never love and for her own good stopped responding to her heartbreaking, and eventually anger filled letters.  There are a whole lot of mistakes there on Reid’s part.  And time moved on…

Ten years later Reid is beginning to experience the mate frenzy where his bear is in desperate need of his mate before going feral.  He and a few other men from his clan are sent off to the Bear Ridge Resort where others in their clan had found their mates.  What Reid never thought possible happened there in the tropical paradise – Aria.  And once more, he makes a huge misstep.

Furever Ours is a fast paced, sexy and at times frustrating look into young love and the choices made.  I could easily understand each person’s point of view, and why they did what they did.  Not that they are excused for acting badly, but it’s not that hard to understand why.  Now in order to find their happiness they each have decisions to make, the biggest being whether to trust again or not.  It is an enjoyable addition to the Furever series, and one that I would recommend to any Shifter Romance reader.