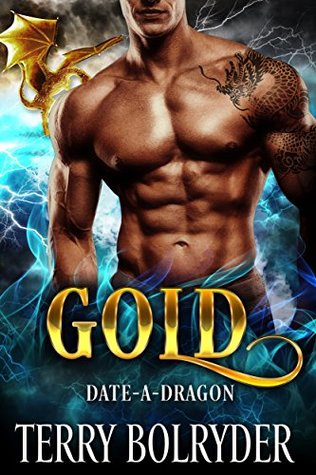 Dante Gildenstern, leader of the noble metal dragons, used to have it all. Wealth, privilege, women fawning all over his beauty. Now, newly awakened in the modern world, his powers are restrained and he’s forced to work at a dating club with the other noble metal dragons in an effort to acquaint them with humanity and hopefully help them find mates. The only problem? Dante isn’t interested in humans. That is until Ella Stanton walks in, all curves and no-nonsense, needing his help more than she may even know.

Ella Stanton needs a date and she isn’t bothered by all those bad reviews for Date-A-Dragon. They’re her last hope for a date to her sister’s wedding in her hometown, and she isn’t about to go alone. So gorgeous, golden Dante it is, despite his initial frostiness and slightly ego-maniacal behavior. He’s unlike any man she has ever met, the sexiest, the strongest, and sometimes he seems to be from another world altogether. But the closer she gets to Dante, the more she realizes there might be more to this pretty boy beneath the surface.

In spite of Ella’s reservations, Dante’s in it to win her heart from the get go. And with a little luck and a lot of romance, the overprotective dragon just may win over his sexy mate. But even the strongest of dragons can’t anticipate the dangers lurking in the mountains of Ella’s hometown.

Titles in the Date-A-Dragon series include:  Gold –

Gold brings us into the stories of the precious metals dragons, once trapped beneath an avalanche in ancient times, now freed and adjusting to a modern world.  Unfortunately for them they were deceived as to exactly who had betrayed them and before that could be straightened out they caused quite a bit of chaos to the metal dragons – which is why their dragon form and magic is collared right now as they learn the lessons needed to exist with the humans of this time.  The precious metal dragons are conceited, arrogant, spoiled, entitled brats, to be completely frank.  All of that may have worked for them back in the day – but it’s not going to win them any friendship awards in this day and age.  To say they need an attitude adjustment is a vast understatement.  The only way to earn their freedom is to prove their care and concern for humans and, oh yeah, find their mates.  Good luck with that.  It’s going to take some pretty amazing women to bring these dragons the love and understanding they’ll need to ever be free once again.

Dante has always been the golden child of power, pampering and entitlement – after all, he is the gold dragon.  Now he’s been hired to be the pretend fiance of a woman who hides her beauty behind unattractive, loose clothing and a horrendous hair style.  It’s obvious that Ella doesn’t want to be noticed, she wouldn’t even be at this dating club looking to hire a stranger to pretend to love her enough to marry her if she didn’t have to return home for her sister’s wedding.  She doesn’t dare go alone so she has no choice but to hire someone and while he may be an arrogant jerk, Dante does fit exactly what she needs for this trip.

They may have far different reasons for being together right now, but if or when Dante gets his way they’ll be together for the remainder of their lives.  He’s found his mate in this woman who hides who she is behind layers of emotions and fears that he doesn’t yet understand.  But she is his and he will battle whatever he needs to in order to have her at his side.  He probably wasn’t expecting what they faced, but Dante is not one to back down from anyone – especially now that his mate’s happiness is involved.

I was completely caught up in Dante and Ella’s romance.  It’s an emotional story that will bring out your empathy for a woman who has been bullied for most of her life, and your loathing for those who made her feel this way.  There are a few surprises, the occasional twist that will put things in a different light.  Knowing what Dante was like from the previous series and the beginning of this story, it’s a very satisfying feeling to watch him grow into quite the amazing man as he learns Ella’s reasons for the need to hire him – and works to gain her trust and affections as well.  There are some interesting factors at work in this first story of the series.  It will be fun to watch how they develop over the rest of the series.

I would definitely recommend this story and this series to any Paranormal Romance or Shifter Romance reader.  An interesting concept, a bit of a mystery, danger, a loathsome villain and a glimpse of what may come for others in this series.  If you’ve enjoyed the Awakened Dragons and the Rent-A-Dragon series, then you’ll want to get on board with this series from the beginning.