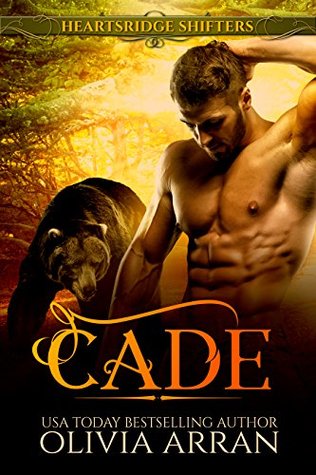 Team South-One Bear shifter Cade Ayers has been tasked with the mission of bringing a rogue fox shifter in for questioning, something that should be relatively easy, since all intel points to the shifter being only a boy. He already feels bad for the kid, but it isn’t his job to pass judgment. That would happen back home, in the shifter town of Heartsridge. Finding himself on the business end of a rifle certainly makes things a little more interesting. It isn’t every day a woman takes his breath away and waves a gun at him. This little, curvy spitfire is armed, spooked, and stubborn as hell. Lucky for him, she might also be his fated mate.

All fox shifter Mina Foxglove wants is to be left alone to work her farm and survive every day as it comes. Actually, that’s a lie and she knows it. What she really craves is to follow her dreams and have a life beyond waking up at the ass crack of dawn to work her fingers to the bone. But life isn’t fair and dreams are just that, right? When a group of men arrive looking for her brother, her first instinct is to fight. Then she lays eyes on him. A bear shifter with a body built for sin and a warmth in his eyes that has her questioning everything she’s ever been told. That inter-species relationships are wrong. That the shifter town of Heartsridge is a bad place.

That a man like Cade Ayers couldn’t possibly be her fated mate.

But, sweet thunder clouds, everything inside her screams that he is. Worse, judging from the heated interest in his eyes, he’s dangerously close to figuring it out. A wink and grin, and she knows she’s screwed. He’s not going to let her go without a full investigation … of the up close and personal kind.

We continue the search for the fox shifter who bit and turned Leona’s sister Harper.  It’s known where he lives, but there are unusual circumstances surrounding the incident that changed one human’s life forever.  Cade is part of the team sent to the farm outside of town to bring in the young fox shifter, for despite his age there still are repercussions for his actions.  Through the bantering and wise-cracking comments of his team Cade was trying to process vital information – this beautiful fox spitfire who was holding a rifle on them was his mate, now what the heck did he do.

Mina would do anything to protect her brother, to prevent these idiots from taking him into town where who knows what could happen to him.  She didn’t expect the scent of one man or bear to affect her so much… and there was no way this bear could be her mate.  Species shouldn’t intermix, it was the doctrine laid down by her father and his cronies, it was wrong, unnatural.  Then why did she find herself leaning in for a better sniff, and why did the same knowledge in his eyes make her heart beat so wildly.

Heartsridge Shifters: Cade gives us a better understanding of the dynamics of the shifter town and the South-One team.  There are so many twists and turns to exploring this new world that I find I don’t really want to chance giving any of those plot lines away, even by accident.  So, I’m simply going to say that this story is fast paced, intriguing, with enemies to learn about, team members to start revealing their true personalities and a delightful, sexy strong romance between Cade and Mina.  Oh, and one firecracker of a Granny.  *grin*

I enjoyed this story very much.  It definitely gave me a better feel for the setting and the people who populate this world.  I’m finding this series fascinating and would definitely recommend this story and the entire series to any Paranormal Romance or Shifter Romance reader who loves a good story, plot lines that hide as much as they reveal, danger, mystery and completely sexy moments.  I had fun with this one, and I believe you would, too.