Her Keeper Bear by Cynthia Wilde 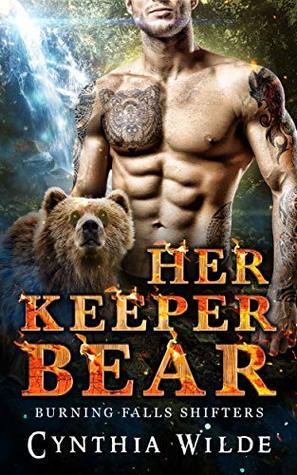 Small town secrets are hard to keep, and those within Burning Falls, harder still…

When Cindy Lowell leaves her cushy job in New York City and returns to her childhood home, she thinks it’s to care for her elderly grandmother, but something deeper is calling her. Despite her attempts to stay focused on her “fresh start”, one charismatic stand-offish jerk named Chase Martin is making that near impossible. The attraction is burning and electric, but she can’t help the feeling he is hiding something from her…something big.

Chase cannot help his immediate animal attraction to “New-Girl-In-Town”, Cindy Lowell. Trouble is she’s a bit too curious about her new home. His job as leader of the bear clan is to protect the town and its citizens, at all costs. Their secrets are meant to stay just that: secret. Even as he tries to negotiate his growing attraction to Cindy, Chase struggles with demons of his own.

Caught up as they are in their own dramas, neither of them recognizes a new threat circling Burning Falls. Will they wake up to it in time to save the town? And as everything starts to blow up, can they handle the secrets they discover?

Join Cindy as she steps into the hidden world of Burning Falls, where magic lurks around every corner and nothing is what it seems!

I’m actually a bit torn on HER KEEPER BEAR the first story in the Burning Falls Shifters series, and that doesn’t happen often.  Usually, I’m all in on a series or I’ll pass it by without regret.  But this time, there is something pulling at me to give it a shot, give it time to develop so I’m going to go with that feeling (for now, at least).

As the first story in a series, HER KEEPER BEAR has world-building to be done, especially as there are several different supernaturals that live in and around this small town.  We have the obvious shifters, witches, perhaps vampires and who knows what else we’ll discover as time moves on.  So that takes a bit of setting up the rest of the stories yet to come.  I get that, and I expect it.

What I’m torn on is the characters and the attitude of the males we’ve met so far.  I’m not really comfortable with some of their conversations, even if it is just “guys talking”.  There is such secrecy surrounding all the residents of Burning Falls that I’m not yet certain what is part of that secrecy and what is actually different personalities.  While the first book can set up a lot it cannot set up everything – or what would be the point of another story, right?  And, also, to be frank, this is my first story by Cynthia Wilde so I’m learning her storytelling style as well.

So, it comes down to am I engaged enough to take the risk, and time to pick up the next story in this series.  And that answer would be yes.  I enjoyed parts of Cindy and Chase’s romance, a lot of it was shrouded in secrecy that made understanding why Chase acted as he did an uncertainty to me.  I’ll give this series the chance to capture me, I think that’s only fair.  And my curiosity is engaged now so I want to know more details, and I’m hoping that the next story will give me enough to continue with the series to the ending.  At this point, time will tell.  HER KEEPER BEAR is a good story and my rating will reflect that, I just do not know yet if it’s a series for me.