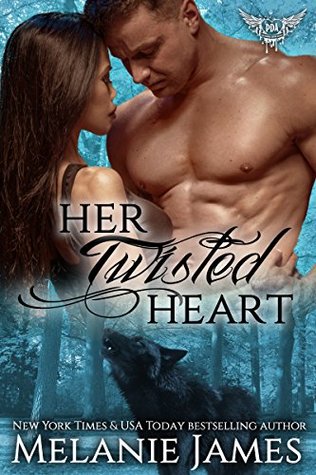 Dating a shifter was one mistake that Callie Dupree refuses to make again. In fact, she’s sworn off dating altogether. When a mysterious man shows up in her dreams, Callie does her best to ignore the long-buried urges that ripple to the surface and carry on with her life.

What could it hurt if she gave into the handsome stranger in her dreams? It’s only fantasy, right?

Wyatt Lockhart is being driven crazy by dreams of his mate. Bold in bed and beautiful beyond belief, he’s stunned to find out the Fates paired him with a human. If he can get her to change to suit his needs, she would indeed be the perfect mate.

This is an adult 18+ story.  This title may contain strong language, possible violence and sexual situations that are geared toward an adult reading audience.

Please visit the Paranormal Dating Agency page for a list of titles reviewed here.  For even more titles by Melanie James please visit her page here at Shifter Haven.

HER TWISTED HEART is an intriguing premise of the mating bond being strong enough between two mates to cross over to their dreams to draw them together.  And while I enjoyed much of this story there was something I simply could not overlook — Wyatt.  I tried, I did but I could not like a man who hates humans so much that the only way he can convince himself that Callie is his true mate is to believe that one day she can shift and become a wolf like him.  *sigh*

So I’ll round this 3.5 star review up to a 4 star for Goodreads and Amazon, but this left a bad taste for me so I’ll be taking a short break from the series to get my head wrapped around trying another romance from the Twisted Tail Pack.