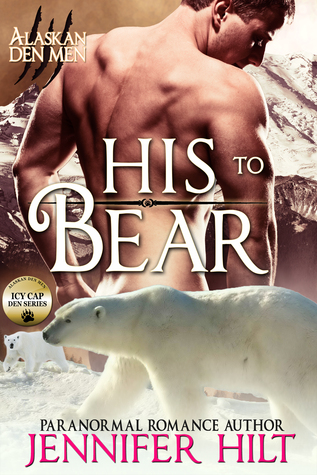 Vampire Meg Chambers has everything she ever wanted–great new job, perfect place to live, and she’s even feeling some sparks flying between herself and her ice-bear shifter landlord and town sheriff, Ash Barlow. Too bad her employment contract stipulates if she acts on the attraction, she’s sentenced to death by staking.

Sheriff Ash Barlow’s off limits sexy housemate is leaving her lingere in their shared bathroom and sleeping in his guest room. Fighting their attraction for each other becomes impossible as blizzards and bear traps throw these two forbidden lovers together. When Meg suffers a serious injury will Ash do the one thing necessary to save her and forever change their lives?

Read on for my thoughts on His To Bear.

From short, sexy beginnings an amazing series often grows – and so it seems true for the Icy Cap Den, a series in the overarching series Alaskan Den Men.

Meg really should have read the contract a bit more closely before accepting the Bite that would turn her into a vampire in exchange for complete forgiveness of her long list of student loans, years in the making in order to become a medical doctor.  The living forever thing wasn’t so bad, imagine the wonders she would encounter over the years.  No student loan debt over her head for decades, yep that’s another good thing.  The people who she would be tending to, saving lives and stitching up scrapes hating her, being aloof and afraid of her – well that kinds sucked but she could sort of understand it.  But no sex with anyone associated with the town she’s assigned to – ever.  What the… how had she not seen that little gem.  Especially since she’s sharing living space with the hottest, sexiest icy polar bear shifter ever.  Okay, being staked would not be a good thing – but never feeling that sexy shifter pressed close to her… there has got to be a way around that clause!  Because she’s either going to die by stake or of want.

Ash has a lot on his plate, why did the fates have to also deliver a sexy vampire to his doorstep?  It’s not bad enough that enchanted bear traps have been placed around town, injuring friends – so far they’d been lucky no one has died.  The suspicion that the damned succubus is back again and he remembered the last time she showed up.  No, to complete his torture he has a sexier than sin female prancing around his guest room.  And she is giving off sparks that he’s ready to fan into flames.  He knows he shouldn’t, but damn why did she have to be his mate?  Oh, what’s one more complication in his life?

His To Bear is such a fun, sexy beginning to the Icy Cap Den series.  Full of banter, danger, troublesome kin, a really stupid act and two people who will risk death to be together… yeah, this one’s gonna be good.  Meg and Ash were hot and perfect for each other.  We’re introduced to several secondary characters who will most likely have their own tales to tell.  The danger is real, and the emotions run high and hot.  I really enjoyed this one, and if You love Shifter Romance, I’m betting you would too.  Check it out.