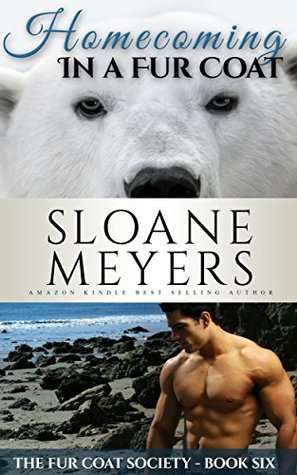 After a year of nonstop turmoil, Mia Evans should be thankful for her new, calm life in Washington D.C. She has a good job and good friends, and she no longer has to worry about being persecuted just for being a shifter. But her heart is restless, and she can’t figure out why. Desperate for a fresh start, she considers moving far away and starting over. But that would mean leaving behind her best friend Calum…who is starting to appear in her dreams as so much more than just a friend. Is it possible he feels the same?

Polar Bear Shifter Calum Pearsons thought life was finally settling down. So when his clan members start to talk about moving to a new city again, he’s angry. He doesn’t want to uproot his life for the umpteenth time this year, and he’s happy with his new job in D.C. He stubbornly swears he’s staying put, until Mia decides she’s moving, too. Suddenly he’s forced to face the harsh reality that losing Mia will be harder on his heart than he thought…

Will Calum and Mia admit their feelings for each other before distance tears them apart? Read this heartwarming bear shifter romance to find out!

The world was slowly returning to normal, well rather a new normal.  The crazed actions of a mad man had killed many in the shifter community, the “bear flu” had destroyed so many lives in the human community.  The world was ravaged, but returning to a sense of normal in that there were jobs to do, daily tasks to accomplish and… life moves on.

Most of their clan, what had been dubbed way back in the pre-madness days as the Fur Coats Society, a special group of friends who happened to be shifters…. most have found their mates and were settling down now.  It has been decided that most of her friends were moving away from the city, back to the beauty of home.  Alaska.  Mia had thought she’d be happy in Washington, D.C. picking up the pieces of her life and forging a new one from the rubble – but in the city with technology back online.  The trouble was that she really wasn’t happy here now.  Oh, she tried to convince herself that she was, but in her heart sh knew the truth.  She has felt the pull towards Calum for so long now, she was convinced he was her life mate.  Yet, he kept their relationship firmly in the friend category.  They were more but he wouldn’t even consider it.

After some deep soul searching, and realizing that Calum simply wasn’t going to see her as anything but a friend, Mia made the most difficult decision of her life.  It was time to leave the city, to leave Calum.  She was returning to Alaska, to a small town, to hopefully still do her job at a smaller office but if that didn’t happen, oh well.  It was time to go home.  To make a new life.  To give up on the dream that Calum could feel the same way for her.

Calum couldn’t believe his friends, his clan mates were leaving.  Everything they’d worked for, all that they’d wanted just a year ago had been here in the city, well Chicago but that city was gone now.  Washington, D.C. could offer them everything, technology, jobs, a life without danger.  Why would they leave all of this to go home to the wilds of Alaska.  No going to Alaska was simply admitting defeat, that they couldn’t stand apart from their parents.  No, he was staying put.  It wasn’t until he learned that his best friend, the one woman he could depend on was also leaving that Calum had to take a good, long, hard look at his life and his choices.  Because, his stubbornness just might cost him the love of his life for nothing more than pride.

Mia and Calum’s story is rather short.  It’s the aftermath of a year of struggles, dangers and changes to everything they knew.  They are the last two of their clan who were without mates – even though Mia, at least, knew who her mate was if Calum wasn’t do darned stubborn.  Homecoming In A Fur Coat is the last story in this series – although, there is a Christmas reunion story, but this is the final story of their past and what could be their future.

Their story has such overtones of sadness to me.  Yes, it is a brand new world in many ways but love lives on no matter how many wars develop, or mad men scheme.  Calum has to lose Mia to realize exactly what she meant to him.  It wasn’t a pleasant experience for him to realize that his foolishness almost cost him her love.  Seeing him appear in front of Mia’s house in his bear form, inviting her out to play once more was the final perfect touch for this series.  Life does indeed go on… and it’s that simply amazing.

I have enjoyed these connected series so very much – from the parents down to their adult children… I’ve loved every single minute of it.  A touch of bittersweet as we leave friends behind.  But I know that they all are in good hands with their mates.  Looking forward to the Christmas reunion story but for me this was the finale.  I would recommend these connected series to any lover of Shifter Romance.  You’ll get caught up and be completely entertained.