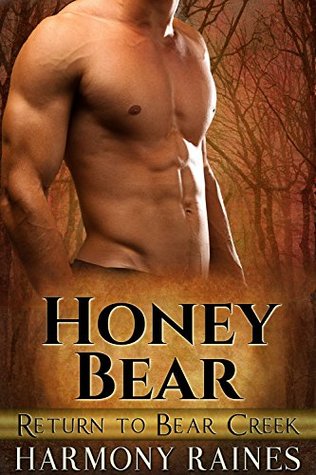 Fern had a rough time growing up. Now she’s making a new life for herself in Bear Creek. A simple, uncomplicated life. But then she meets Theo and everything changes. He offers her his love, he offers her his loyalty. He tells her he will love her forever. Can she ever be the woman he wants and deserves?

Bear shifter Theo left Bear Creek to see the world. But now his dad needs him.

Theo never expected to find his mate, but she’s there at the airport, waiting to take him to see his dad, and the bond between them is unmistakable. He sees the way she covers her wrists, he knows there is a darkness inside her. He knows he is the one who can shine a light on that darkness and extinguish it forever.

Fern is the sweetest woman he’s ever met, shy, reserved, innocent. And just like honey to a bear, one taste of her lips is never going to be enough. Can this honey bear win his mate’s heart, and seal her happiness?

Fern has been through enough trauma and sadness to last a lifetime, and beyond.  Since she’s moved to Bear Creek, faced part of her past and begun working at the community center life has been good.  Good, but there is always a part of Fern that waits for the next crisis to happen, the next blow to fall for that has been her experience in life.  She’s learning to live life differently, but she is still a work in process.  Today her hard earned composure is going to be tempted as she faces the danger to one of her friends and will soon face her future, if she dares.

Theo had just returned from a climb of Mount Everest when he finally got the numerous message from someone named Fern.  He had to go home.  Now.  His dad was ill and he needed to be gone yesterday.  Walt had given his son and daughter the freedom to grow beyond their home.  To face life doing what they wanted to do knowing he’d always be at home when they needed him.  Well now Walt needed his kids, and Theo would break records to get home quickly never knowing that more than his father’s illness awaited him back home.

Honey Bear is an emotional story.  We’ll get a bit more of Fern’s background that we didn’t know, and it explains a lot.  Theo soon realizes that Fern is his mate, but she’s holding onto secrets… as is he since Fern is not a shifter.  One overheard conversation will lead to a misunderstanding that Theo must rectify immediately, even if Fern isn’t quite ready for the entire truth.  Watching Fern blossom into the vibrant young woman who was robbed of so much is a delightful and heart warming experience.  We’ll meet up with many familiar faces.  And have a front seat to the romance that grows between one determined bear and one wounded human.

I’d recommend Honey Bear and this entire series for any reader who enjoys a solid couple, some emotional moments and a community that leaves no one out in the cold.

Stealth and the Dragon by Sloane Meyers

Stealth and the Dragon by Sloane Meyers