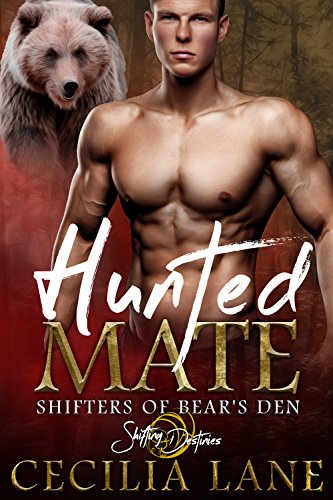 A wounded fox shifter hiding from her past.
No one could call fox shifter Becca Holden fragile. She’s been to hell and back and got the t-shirt, thank you very much. Years ago, she found herself pregnant with her mate’s baby. When she miscarried, Nolan turned away, leaving her to grieve on her own. She left Bearden, vowing never to return.

She’s been alone ever since.

Drifting from job to job, her life takes on a new level of misery and danger when she falls prey to hunters. Men who want to use her for their depraved version of fox-hunting. Becca manages to survive. Barely. She escapes her nightmare, but with nowhere left to go, she’s forced to return to Bearden.

A second chance with the mate he lost.
If Nolan Byers could have one do-over, it would be Becca. He and Becca were too young when she got pregnant, and when she lost the baby, they drifted apart. Becca left town, taking Nolan’s heart with her.

Time hasn’t healed this wound. If anything, the pain is worse. Ten long and lonely years pass until, one day, she returns to Bearden. Becca… his Becca. She’s as beautiful as ever. The moment he sees her, he knows why he never wanted another woman. Because of Becca.

His one. His only. His mate for life.

Now he just needs to convince Becca to forgive him. But the feisty fox shifter wants nothing to do with him. He sees her around town and she either shuts him down, brushes him off, or flat-out ignores him.

Her sass infuriates Nolan’s bear. His self-control unravels a little more each time he sees his beautiful, aggravating and smart-mouthed little mate. When a fire burns through Becca’s home, a fire that starts under suspicious circumstances, Nolan makes his move.

Becca’s in danger and his possessive and angry bear will no longer be denied.

“Hunted Mate” is the third story in the Shifters of Bear’s Den series, which is part of the Shifting Destinies world.  All of the titles in these series which make up their own world can be found on the Cecilia Lane page.

“Hunted Mate” is the third story in Cecilia Lane’s series Shifters of Bear’s Den.  Life seems to be settling down a bit after the events in the first two stories in this series… but for Becca and Nolan, things are just beginning to reheat.  Becca has been a vocal secondary character in this series so far, but now we get to understand the love/hate relationship she has with Nolan, and it is as heartbreaking as it is, at times, frustrating.  These two are mates, a delightful fact that they discovered far too young to face what life had in store for them very early on.  When tragedy struck neither had the wisdom or the maturity to turn to each other, instead, they kept to their own heads, allowed rampant grief make decisions for them that further changed their lives.  While Becca’s memories and emotions paint Nolan’s actions with a very dark brush, in reality, there was much she didn’t know at the time.  Whose fault was that?  Neither one.  They were eighteen and seventeen,   So young to take on the responsibility of mates, becoming parents, and then grieving individuals who could not or would not turn to each other for comfort.  Although she barely acknowledges it to this day, it was Becca’s need to run away from Bearden, from her twin, from Nolan that leads to even more pain in her life that carries over into her future.  Unfortunately, the past that she came home to escape is about to catch up with her… and the town.

I listen to my instincts while reading.  And there is one new character that I mistrusted from their first appearance… and in reality, I’m still not comfortable trusting them after their actions.  Considering how this character may play into the rest of the series perhaps I should be more open to the possibility of forgiveness… but I find that I cannot.  And I’m not certain how the rest of this clan will be able to overlook the past either.  The reading jury in my head is still out on this one.

“Hunted Mate” is intense in both storyline and the emotions that this story brings out in the reader.  It was, in many ways, a bittersweet return to Bearden for me.  Throughout this story Becca and Nolan are working their way back to each other… reluctantly, cautiously, but steadily back to the one who matters most of all.  It’s an emotional journey full of anger and tears but it’s one they need to make in order to face what is coming.  There is a danger to the residents of Bearden once again, an old enemy sneaks in, and a new enemy strikes.  It was easy to fall back into this world with the hope of a reunion and the sense of more danger just around the corner always at the forefront of my mind.  There are twists, a few surprises, and some lifelong changes in “Hunted Mate”.  I enjoyed myself, even when I didn’t agree with what was happening… that’s why I’m the reader, not the writer… but I certainly had a tense, entertaining time in this world once again.  I would not hesitate to recommend this story and this series to any Paranormal Romance or Shifter Romance reader who enjoys involved storylines, characters that will set off your emotions and danger that lurked just about everywhere… even where you least expect it.