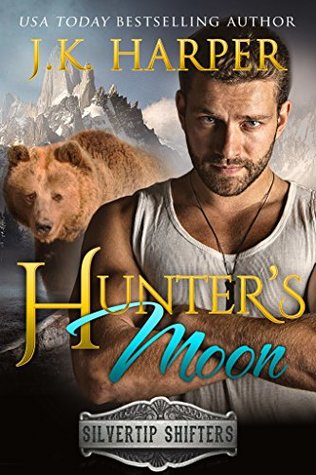 Abby Kenyon belongs to Quentin Walker heart, body, and soul. But she’s a wolf shifter from the pure Black Mesa Wolves Pack, and he’s one big brute of a bear shifter from the mixed Silvertip Shifters clan. She can’t have a bear as a mate.

Quentin Walker knows down to his bones that Abby is his mate. But she’s never seen a mated wolf/bear pair and is certain it can’t work. The autumn full moon mating run is Quentin’s last chance to prove that only he can win the hunt for his mate’s heart…

Hunter’s Moon is a quick story that serves as the introduction to the connecting series, Silvertip Shifters.  Abby and Quentin are in a very loose relationship – they care about each other, Quentin knows that Abby is his mate but she cannot accept that her mate is a grizzly bear shifter because she has never known of an inter-species mating so she doubts her wolf’s feelings.  Hunter’s Moon shows the lengths that one determined man is willing to go to in order to have his mate at his side.

While the story is short it also sets up the rest of the Silvertip Shifters series to come.  I loved Quentin.  He knows his mind, he knows his mate but he is finding it exceedingly difficult to convince Abby that they are fated mates.  The brief look we got at Quentin’s brother shows that there are some interesting stories ahead for us in this series.  Because her pack is exclusively made up of wolves Abby has no working knowledge of a bear and wolf pairing and is convinced that it would not work between them.  It’s up to Quentin, and perhaps a few members of her wolf pack, to prove just how well they can work and do belong together.  If you’ve followed the Black Mesa Wolves series then you may recognize a few faces – but it’s not necessary to have read that series to get started on this one.  However, I would strongly recommend it mainly because the Black Mesa Wolves series has some amazing stories to experience.  I enjoyed my time in this new world and would recommend this story to any Paranormal Romance or Shifter Romance reader.