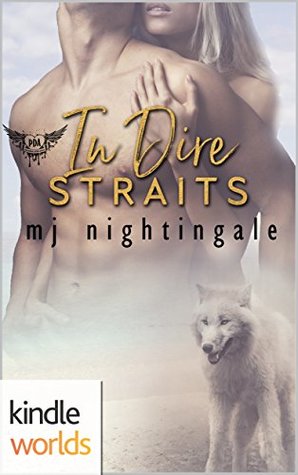 Annie’s had plenty of luck her whole life…and all of it bad. Her career as a realtor is going fine, but the only affection she gets comes from her precious dog, Buddy. Just when she feels she’s hit rock bottom, fate intervenes in the form of Gerri Wilder, who has just the mate in mind for Annie.

As hard as it is to admit, Bill Armbruster needs help in finding his fated mate. The choices he made on his own in that department didn’t exactly work out for him. So, he knows he can’t go wrong using the PDA – Paranormal Dating Agency. And luck is with him as he’s immediately taken by the gorgeous and curvy Annie. Could she truly be the one?

But when Bill’s past puts Annie in dire straits will he be able to get her out of it? Will Bill be able to take on his pack leader, and deal with the psycho ex who simply won’t take no for an answer? Can their love survive what fate has in store?

Titles in the Cazenovia Pack series include:  In Dire Straits –

In Dire Straits takes us to Florida for some matchmaking, fun in the sun, and danger.  There are plenty of laugh out loud moments both from Annie’s misconceptions and between the couple.  And there is also a very real danger from a deranged ex-girlfriend in a power hungry scheme where she is willing to kill to obtain what she feels is hers to take – no matter how many people she hurts in the process.

Bill has left his dire wolf pack in upper New York for several reasons, mainly because of the way his ex-girlfriend has changed his best friend and the power driven plan she has for the three of them to take over the pack.  Bill wants nothing to do with her and thinks to relocate to Florida and have a place for his aging parents to winter in as well.  His honorary aunt Gerri Wilder is on the lookout for his mate, and what she has in store for him will be absolutely perfect… as long as he can keep Annie alive.

Annie is tired of the silly and stupid flirtations of both clients and co-workers.  Coming out of a long term relationship she’d been looking for Mr. Right in all the wrong places.  A chance encounter with Gerri will put her in a unique position… if she believes this matchmaker.  But come on… a guy who dresses up like a Furrie for kicks, well whatever floats his boat.  Somehow what Annie thinks she’s getting in Bill and the reality are quite different, but everyone has to learn sometime.  Annie is funny, sassy and definitely interested in Bill.  But their romance hits a rough spot when danger from Bill’s past shows up at the door.

I enjoyed In Dire Straits very much.  Ms. Nightingale has been true to the PDA world, and yeah I think she did Gerri proud.  The passion between Bill and Annie is obvious and hot, the danger from the past is very real and the end results… make for an intense, sexy and intriguing story.  I will be keeping an eye out for further stories in the Cazenovia Pack for I’d love to know more about some of the members of Bill’s dire wolf pack.  I would not hesitate to recommend this story to any Paranormal Romance or Shifter Romance reader.  You’ll find humor, danger and sexy times.  You’ll also find characters who grab your imagination, and ones you’ll want to know more about.