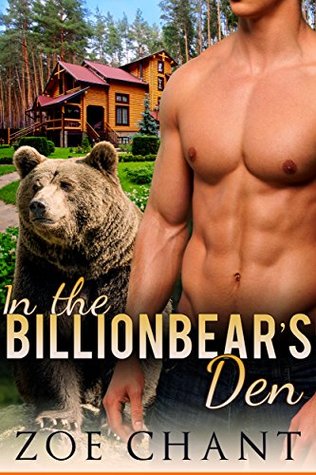 Curvy Kristin Harris can’t get a break. Between her overbearing boss, all-nighters at the office, and her needy ex-boyfriend, she’s stretched to the limit. When she books a long weekend at a B&B in the tiny town of Forest Mills, she’s just hoping to catch up on her sleep—not to find love.

Billionaire bear shifter Michael Reed has almost everything he wants. He’s built his own dream house in his beloved hometown, he has acres of beautiful forest to roam in, and he has more money than he can spend. But what he really needs is someone to share his gorgeous house with, and he’s starting to think he’ll never find her.

When Michael meets Kristin, he knows she’s the one. After a sizzling night together, all he wants is to sweep her away and give her a better life. He’s built a house, but he’s sure she can help him make it a home. But will she still be willing to live in the billionbear’s den when she learns his secret?

Shifters can’t seem to keep their hands off of their mates – so, Adult Content 18+ readers.

Read on for my thoughts on In The Billionbear’s Den.

I’m addicted to series, especially Shifter series, I freely admit that fact.  Yet, it’s nice to take a break from an ongoing story and just settle in with a good Shifter Romance that wraps up the entire story for me in one sitting.  That’s why I love Zoe Chant’s single titles, as well as her series.  I’m pretty much guaranteed a good, solid, sexy, love story every time.  And In The Billionbear’s Den is no exception to that general rule.  🙂

Kristin has simply had enough.  Enough of her childish, wimpy former boyfriend.  Enough of her boss, who has her working overtime, all night long, all weekend long on his stuff, things that he should be able to do on his own.  She shouldn’t be considered the only person keeping the company afloat – meaning she works herself to death and her boss takes the credit.  Enough is enough is enough!  So she’s taken a long weekend away from the city, turned off her phone and all she wants is to relax, sleep for hours and get away from the craziness of her life.  Little did she know her life was about to get a bit crazier.

Michael is tired of the fast paced life.  He’s built, well mostly by himself, his dream home right in the middle of the forest where his bear loves to run and just be.. bearish without fear.  He has friends, he has money to burn, he’s working on completing his home, his den … what he lacks is the one woman, his mate to make it all worthwhile and complete.  Logically he realizes he’s not going to find her by holing up in his home, but he didn’t have a clue that he would run across his mate sleeping in a meadow – or that his bear would scare her half to death when she awoke.

In The Billionbear’s Den is a fun, lighthearted romance that made me smile, shake my head at the characters and completely enjoy my time spent with Michael and Kristin  While Kristin can’t believe this handsome, sexy man wants to spend time with her, Michael cannot believe how he keeps fumbling things with Kristin.  Okay, so maybe part of that is his bear won’t let him think straight because the bear has found their mate.  There were moments when I just sorta went “Oh Michael what were you thinking” – and maybe a few “Kristin, grow up and grab what you want”… but that’s to be expected in any romance, and definitely in Shifter Romance.  They’re a cute and sexy couple, he adores her and she’s beginning to believe that there is a happy ending out there for her too.  I completely loved this story and I’m think you would too.  Check it out, a quick and satisfying read.