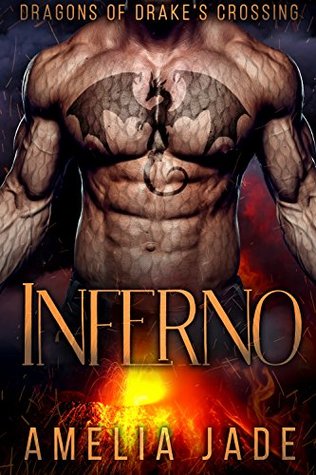 Hollie Fowler has given up all hope of living a normal life when she returns to Drake’s Crossing. She lives for her job, operating a heavy duty borer, Big Betty. Hired to run a train line through the nearby mountains, she hopes to breathe life back into her hometown. What she doesn’t know, is she’s about to stumble upon an ancient beast, one who stirs up feelings she’s buried so deep even Big Betty couldn’t hope to reach them.

When dragon shifter Obsidian is awoken from a peaceful slumber, he’s determined to teach someone a lesson. So what if he’s been asleep for a few centuries too long, he’s a dragon, master of his own destiny. Until he sees her. Feisty and unafraid, this human holds his fate in her small but capable hands.

Sparks fly as Hollie and Obsidian clash. Drawn to each other, yet intensely independent, they must find a way to work together…because the dragon wasn’t the only thing buried under the mountain. Can Hollie work alongside the blunt dragon, from another time, and save the town from a dark danger that has awoken? Will she tame his brash, reckless nature? Or succumb to his unimaginable power, which makes her heart race, and her body pulse with an ancient need of its own.

Titles in the Dragons of Drake’s Crossing include:  Inferno – Ember –

I am not a reader who gives up easily on series after only the first story.  Having said that I will pick up Ember, the second in the Dragons of Drake’s Crossing series,, but I’ve a feeling this will follow my usual pattern with Amelia Jade’s work.  There are some series that I completely love and follow.  There are others that are simply not to my personal liking – and that’s fine, we’re not all going to love the same books.

While I found the premise of Inferno interesting, a waking dragon, centuries past and dealing with the modern world, these two characters did not transport me to a world that I’m certain I want to visit again.  And no, I’m not going to toss insults, that’s not my way.  This book was simply one that was not for me.  If I cannot care about or connect with the characters in some way, then the story falls flat for me.  And Obsidian and Hollie were never more than words on the page, they never became alive to me so I had no interest in them reaching a happy ending.  I could give you several reasons why but truly what’s the point?  Simply because I could not connect does not mean that you will feel the same way.  For you Inferno might be just as high on your list as Ms Jade’s several linked series around the land of Cadia is for me.  We can have a different opinion.  As I mentioned, I’ll try Ember and see how things go from there.