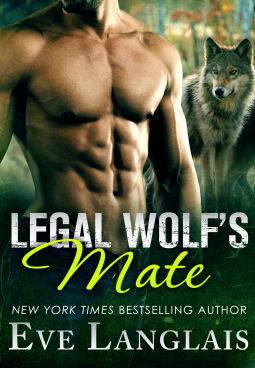 In Legal Wolf’s Mate, taking on a pro bono murder case isn’t a problem for a lawyer who enjoys a challenge.

Discovering that his new client is his mate? A tad more complicated.

Gavin has no intention of settling down, especially not with a woman accused of murder, but once he sets eyes on Megan, his fate is sealed.

Read on for my thoughts on Legal Wolf’s Mate.

Gavin and Megan’s story first appeared in the anthology Growl.  If you purchased that book, then you’ve probably already read this story.  If you haven’t then you’re in for a treat.

Gavin is a wolf shifter.  Not naturally born, he was turned unwillingly  He had no intention of following the plan his maker had for his life and has become a very successful lawyer.  And now, once again, his world is about to be tipped upside down.

Megan is the least likely candidate for murder.  She’s a secretary who keeps her head down and goes about her life.  Yet between returning home with a dinner treat for herself and the police arriving to arrest her – she has no clue.  There’s no way she could have done what they say, but there’s also no way she can prove them wrong by herself.

The very last thing Gavin expected when he met his newest client was to recognize her.  His mate.  He’d heard the stories and had always scoffed at the tales of finding that one who was the perfect match, soul mate to you and your wolf.  Never, ever bought into that right up until he set eyes on Megan.  Now, he not only has to clear her of a murder charge, but also keep her safe while convincing her that they are fated mates.  This is a case he cannot afford to lose.

I enjoyed Legal Wolf’s Mate.  There are several twists that play out nicely.  But… there is one major plot twist that readers are either going to love or it will change their entire opinion of this story.  I’m going to keep my opinion on this to myself and let you decide what it does for you.  On another note, if you enjoy following secondary characters into their own stories – Brody has his tale told in the current anthology now out entitled Wild by the same author trio.

I would definitely recommend this one for any Paranormal Romance reader, especially if Shifter Romance is one of your favorites in that genre.

*I received an e-ARC of Legal Wolf’s Mate from the publisher, St. Martin’s Press and NetGalley in exchange for an honest review. That does not change what I think of this novel.*

(This review originally appeared on my multi-genre blog, Keeper Bookshelf.  Since I tend to like many genre, I usually cross post to the specific genre blog of mine for most reviews.  Legal Wolf’s Mate fits perfectly here at Shifter Haven.