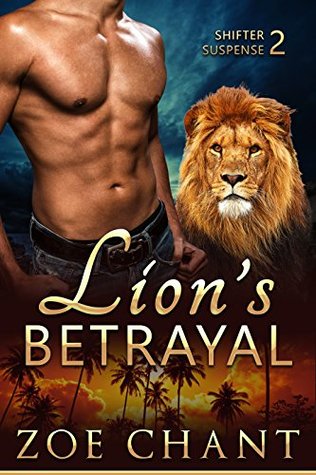 Chloe Kent worked her ass off to get a housekeeping job on Harper Island. The island is practically paradise: white beaches, blue skies, luxury facilities… and it’s all a lie. Just like her. She’s not a cleaner desperate for work; she’s a reporter, hot on the trail of the scoop of a lifetime. But what she finds on the island is beyond anything she ever imagined.

Billionaire lion shifter Mathis Delacourt has everything any man could want. But there’s something missing: an emptiness inside him that nothing can fill. He’s left his old life behind, pretending to be a down-on-his-luck bruiser. Fighting, adrenaline—it fills the hole for a while, but leaves him feeling emptier than before. When a mysterious benefactor invites him to his private fight club on a remote island, Mathis jumps at the chance to fight other shifters. Is this the challenge he’s been looking for?

Chloe and Mathis don’t find what they’re looking for on the island, but they do find each other… just in time for the trap to close.

The island’s owner lures shifters to his private resort so he can force them to fight for his entertainment. And he never lets anyone leave.

Chloe is everything Mathis was searching for, and the island’s owner knows it. Can their love survive, when it’s used as a weapon to control them?

I admit that I was very glad to see another story with this group of friends and family.  When I read Panther’s Promise a while ago, I knew it would make a great beginning to an amazing series (should it go in that direction – which it did), and one with some pretty interesting secondary characters who I’m hoping will eventually get their own stories told.

In Lion’s Betrayal we meet Mathis, a lion shifter, part of a powerful pride and a man searching for something – he calls it not following the rules, but his constant need for the punishing sport of underground fights would tell another story.  When his last victory in the ring brings him to the attention of a rich shifter with his own private island, and his own shifter fight club, Mathis jumps at the chance to fight against the strength of other shifters and stop holding back as he must when he fights humans.  His search for “something more” would take him to the absolute worst place in order to find the right person he’d unknowingly spent his life searching for.

Chloe was successful in infiltrating this island paradise.  Sure, she’d had to twist a few facts, or lie through her teeth if you want the truth, but she made it.  Now all she had to do was get proof of the illegal animal fights that went on here, get back to the mainland and expose this resort’s owner for the piece of scum he was.  Only it didn’t work out quite the way she expected.  Yes, there were illegal fights going on… but these weren’t dog fights.

We’re given one of the slimiest, most vile villains I’ve read about in quite a while in this story.  And I have to admit to laughing out loud when his shifter animal is revealed.  Actually, it kinda fits but not in the way you might imagine.  There are several important secondary characters in Lion’s Betrayal, ones that I really hope that we get a chance to find happy ever afters for at some point in the future.  Mathis and Chloe make a believable couple, facing some incredible circumstances in order to even survive.  Their story is tense, intriguing and draws you in to their fight for freedom.  I really enjoyed getting to see some familiar characters again in their story.  It’s small touches that keep me involved in a series, and Ms Chant does them so well.

Lion’s Betrayal is a story where you don’t “have” to have read the first, Panther’s Promise, in the series to enjoy or even follow the events happening in this story – but it’s a great story, so don’t miss it.  I’d recommend this story and this series to any Paranormal Romance or Shifter Romance reader who enjoys a good story, likable characters and unexpected twists.