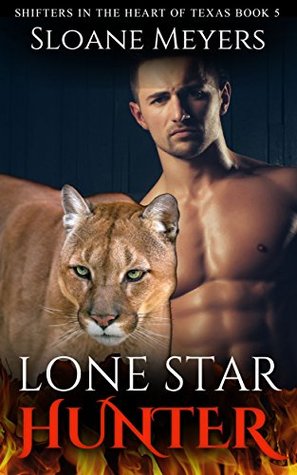 Mountain lion shifter Griffin Moore just wants to be left alone. But his life of solitude was disrupted when several shifters from his past arrived on his doorstep, asking him to help them find the ancient dragon stone that could stop the brewing shifter war. Griffin grudgingly agrees to help them, only to discover that finding the dragon stone will first require a difficult search for the most elusive of shifters: the unicorn shifters. The only thing that could make this task more difficult? Throwing a bubbly, overtalkative woman into the mix. But when circumstances force Griffin to bring the incredibly beautiful Avery Fisher on his search mission, he soon realizes that not only is there more to her than meets the eye, but also that she might be the only one who can make his quest successful.

Avery Fisher is starting over. She moved halfway across the country to find a nice, quiet place to spend her days writing, and, for a short time, her plan seems to be working out well. But a chance twist of fate pulls her into the world of shifters—and of the handsome but gruff Griffin Moore. At first, she’s in disbelief that shapeshifters, and an ancient dragon stone, could actually exist. But when she realizes that Griffin is telling the truth, and that she’s falling for him, she has some hard choices to make about whether it’s time to start over again, or whether she should help Griffin with his strange hunt for shifter secrets…

Can Avery get past Griffin’s gruff exterior to convince him that she can help him find not only a unicorn shifter, but also the love he doesn’t even know he’s craving? And will Griffin finally learn to trust his heart when it tells him that it’s time to stop hiding behind his self-made walls and give love a chance?

The tensions and the action are ratcheted up another level as the journals that Griffin has been decoding begin to offer more valued information on the search for the Dragon Stone.  Poor Griffin, he really doesn’t want or like to be around others… at all.  His self-imposed solitary life has been blown right out of the water with the danger now facing both shifters and the humans with the threat of another shifter war.  He’s lost so much because of that evil side of his world but now with the journals giving him enough clues to know he needs to go hunting – well, it’s time to head back to civilization and meet with the others once again.  Who would have ever thought that the simple, basic need for gas and coffee would put him right in the path of the one person he needed most in his life – his mate – a non-stop talker, bubbly with happy vibes human.  Yeah, just his luck.  *grin*

Avery has done the impossible.  She’s actually left her dull, annoying life behind and headed out to capture her dreams.  Her poetry writing career is off to a good start but the need for a part time job to pay the bills is going to expose her to a world of trouble and beings she could never have imagined existed outside of lore and paranormal romance books.  She’d been warned by her boss that when the gruff, strong but totally silent customer, Griffin, showed up at the convenience store to simply ring up his purchases and let him be… but, he was so fascinating that she just had to get him to talk to her.  She’d wear him down eventually.

When Avery is attacked by the evil shifters Griffin cannot help but come to her rescue.  And that begins their mad escape from the area where Avery has no choice but to stay with Griffin if she values her life.  What started out as a rescue quickly moves on to something more as Griffin stops fighting his attraction for this noisy, ever happy human.  He’d protect her any way, but the fact that she’s his mate just guarantees that his solo days are done – now they just have to find a unicorn.  And he’s the best damned unicorn hunter around.

The pairing of the strong, silent, gruff Griffin and the funny, nonstop talkative Avery was such absolute fun… talk about opposites attract!  I really enjoyed this couple and their search for the elusive unicorn shifter who had to be somewhere near the area since he’d delivered the journals in the first place.  The action is intense and this story makes a perfect lead into our unicorn shifters story coming up next.  I had fun with Griffin and Avery and I’m loving this series – and isn’t that what the joy of reading is all about?

Definitely recommend this story and series to any Paranormal Romance or Shifter Romance reader.  It’s quite an enjoyable ride… and we get to learn about a shifter species that we rarely see.  Now that’s a win for me.