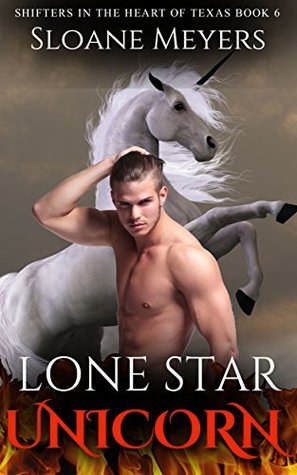 Unicorn Shifter Pierce Dyer has long been a man apart. He has given his life to protecting good shifters and holding back the enemies who would try to destroy them. Along the way, he’s given up on what matters most to him—a lifemate to love and be loved by. But when his latest mission unexpectedly brings an old flame, Aria Olsen, across his path, he starts to wonder if he gave up on love too soon. And when it turns out that Aria is the key to capturing the all-important dragon stone, Pierce begins to wonder if destiny is trying to tell him something.

Aria Olsen has spent the last ten years alone, and she’s not looking for a boyfriend. She’s especially not interested in rekindling an old romance with the man who broke her heart so badly that she hasn’t been able to love again since the day he left. But when she realizes that the fate of the entire shifter community depends on her helping Pierce Dyer find the dragon stone, she has no choice but to spend time with him. When she does, sparks fly between them once again—but Aria isn’t sure if she can forgive him for the past.

Will Aria find a way to let love heal old wounds? And can Pierce save the shifters and his own heart at the same time?

As the attacks against our shifter group intensifies, the need to find the dragon stone becomes even more vital in the coming battle between good and evil shifters.  They’ve found the necessary unicorn shifter in Pierce – now they must quickly find the stone.  Following the clues uncovered by Griffin’s decoding abilities, Theo, Griffin and Pierce are headed to a set of caves in Greystone, a small town near San Antonio – a city that holds the best and worst memories for Pierce.  It was there that a decade ago he’d found his love, his mate – and through foolish pride, arrogance and anger had lost her as well.  Aria was heavy on his mind as he and his friends headed out on this mission.

From the description of the three strangers she’d served in the town’s tiny diner, Tom’s no good girlfriend was perfectly describing the love of her life, but why would Pierce be here?  What mission could have possibly brought the unicorn shifter protector here?  Two things were confirmed as she glanced down from the stage at Grey’s Bar – yes, Pierce was here handsome as ever, and yes – she still loved her mate with everything she had to give.  That didn’t mean she’d forgotten the words they’d tossed at each other, or the lack of trust – but maybe, somehow fate could be kind for once.  Wolves mated forever, she’d discovered the truth of that over the years – she figured she would soon find out exactly what her mate was doing here.  And if she secretly prayed it included her, well a girl could dream.

Lone Star Unicorn was everything I’d hoped for… and so much more.  Pierce and Aria were strong characters who had allowed angry words, lack of trust and immaturity to break them apart years ago.  With the passage of time, and somewhat cooler heads they have to acknowledge the rightness of being together and the foolishness of the past.  Yet, Pierce is a fierce protector and he still needs to learn the bittersweet lesson of trusting his mate to be as strong and powerful as he is.

The race to find the dragon claw stone intensifies, a narrow escape and an epic battle are yet to come.  And still the story will not end here but the next one in this series releases in February 2017.  I absolutely love this series – and if you enjoy Shifter Romance I would highly recommend that you get started on this series.  You’ll be hooked in the most wonderful way.