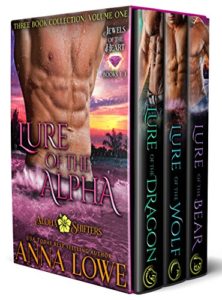 Do you love Shifters?  Want to visit the beauty of Hawaii?  Perhaps have a fond memory of a certain sexy private investigator named Magnum, P.I?  Then you really should be checking out the stories contained in this boxed set of Lure of the Alpha, which includes books 1 through 3… and bonus, new, additional scenes that only add to these amazing tales.

Have you ever read a really good story that you simply didn’t want to end?  One that you felt certain that there was more to the whole story?  Yeah, me too.  Anna Lowe gives us that extra something in this boxed set by giving each story more… more of the love, sexiness and devotion of these couples.  I had already read Lure of the Dragon, Lure of the Wolf and Lure of the Bear when they first came out.  I read them through my Kindle Unlimited subscription back then.  Today I went and purchased this boxed set because of the bonus material.  Why?  Because I know how they all ended, and to get just a bit more of each couple’s experience is well worth the price for me.  And, yes, these shifter romances all are really that good, as well as making it possible to have these stories in my collection to re-read at any time I want.

Here’s a glimpse of what’s in store:

Lure of the Dragon

A beautiful new world opens up for us in Hawaii for this series.  And if the estate where our Shifter former Special Forces now Private Investigators doesn’t remind you of the Eagle’s Nest from Magnum, PI… then I’m older than you.  *grin*

Lure of the Dragon is Kai and Tessa’s romance, one that opens up all sorts of possibilities for this series.  The world building for this first of the series was so subtle that you’re learning about this world as you read so if flows naturally.  Exactly as I prefer.  Tessa is rescued from a dangerous situation by a desert fox shifter, Ella, who has ties with the Twin Moon pack.  And quickly sends her off to Hawaii and the men at this estate who will protect her from a man who wants to harm her and an enemy these men know well.  Never knowing about shifters before she was attacked yesterday, Tessa isn’t quite her feisty self as she faces the totally unknown alone.  But there isn’t much choice, these men either help her or not.  Taking a chance is the only option she has left right now.

Lure of the Wolf

Lure of the Wolf will grab your attention from the opening scene right through to the final page… and then maybe wish for just a bit more.  Once again we meet up with our former Special Forces men at the luxurious, private estate where Tom Selleck would feel right at home, right down to the red Ferrari in the huge garage.  This time it’s our lone wolf, Boone, who takes the spotlight and finds his mate… along with some enemies of old.

Nina is an amazingly strong character, especially given her circumstances.  If the opening scenes of this story don’t draw you in for the rest, then I don’t know what would.  I liked Nina, she might be down right now but she’s not giving up the fight.

I said it in my review of Lure of the Dragon, and I’ll say it again for Lure of the Wolf – I believe this is Anna Lowe’s best writing, best series yet.  I’ve read her work for a long time now, and while I’ve loved it all this series is a whole different level of good.   You’ll discover an intense story full of danger, a love story full of promise and passion, and a cast of characters to love, to loathe, to get right into their journey along with them.  That is the magic and you shouldn’t be missing it at all.

Nina and Boone’s story proves that sometimes you simply have to go with your instincts, that what is said to be real often isn’t and the only thing you can trust in the end are your own gut feelings.  They rarely lie.  Lure of the Wolf is a story that I would not have missed for the world, and I’m awaiting the next one with impatience.

Lure of the Bear

We’ve become slowly aware of the fact that there is something between our grizzly bear shifter, Hunter and police officer Dawn.  Her determination at catching the speed limit breaking shifters of Koa Point has become a bit legendary… even if she only gives them warnings… and even if one man is certain to always be a bit heavy on the gas on that particular stretch of road.  It’s been a nice side touch, knowing at some point Dawn would be more important to the series than giving out speeding tickets.  Then, if you’re following the series, an event happened in the last story,Lure of the Wolf, that puts everything Dawn knows and understands into question – and brings a bit more sorrow to one shifter who loves her.

If you’re in the mood for some sexy shifters, a dangerous villain, some silly antics of a bridezilla on a rampage, fast action, a touch of mystery and that feel of stepping back into the spell of Magnum, P.I. once again – then Lure of the Bear is the story for you.

So, yeah.  I guess you can see from the parts of reviews above that I’ve written for these books that I absolutely, freaking’ love these guys and their amazing mates.  I believe you’ll love them as well… and those additional bonus scenes, just icing on top of a very delectable cake called Lure of the Alpha.