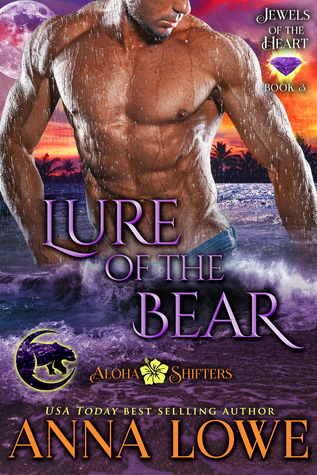 There’s not much that can get this grizzly shifter worked up — except a threat to the woman he has secretly loved for years.

Then all bets are off, and he’s willing to risk anything — including the most closely guarded secret of his lonely shifter soul.

Trust issues? Officer Dawn Meli has a few. She’s not ready to rely on any man — especially one who can turn into a raging beast. But strong, silent Hunter, with his steady voice and soulful eyes, calls to something deep in her scarred soul. So much so, that she’s dangerously tempted to let her wild side free. At the same time, she has other problems to concentrate on, what with a valuable gem, a celebrity wedding, and a tropical storm all converging on Maui at the same time. Hardly the time to give in to simmering desire — even if destiny has different ideas.

We’ve become slowly aware of the fact that there is something between our grizzly bear shifter, Hunter and police officer Dawn.  Her determination at catching the speed limit breaking shifters of Koa Point has become a bit legendary… even if she only gives them warnings… and even if one man is certain to always be a bit heavy on the gas on that particular stretch of road.  It’s been a nice side touch, knowing at some point Dawn would be more important to the series than giving out speeding tickets.  Then, if you’re following the series, an event happened in the last story, Lure of the Wolf, that puts everything Dawn knows and understands into question – and brings a bit more sorrow to one shifter who loves her.

If you’re in the mood for some sexy shifters, a dangerous villain, some silly antics of a bridezilla on a rampage, fast action, a touch of mystery and that feel of stepping back into the spell of Magnum, P.I. once again – then Lure of the Bear is the story for you.  I’d highly recommend this story and this series for any Paranormal Romance or Shifter Romance reader.  While I suppose they really don’t “have” to be read in order, I would highly suggest that you start from the beginning for some things, characters and events do overlap a bit at times.  Besides, it’s a great series so it’s no chore to start at the beginning.