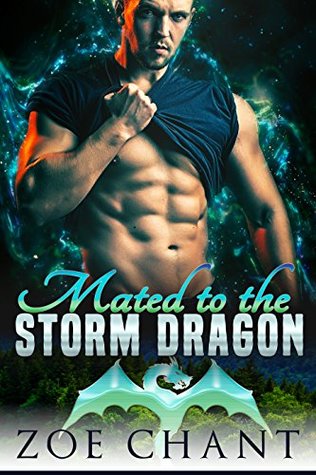 Naomi Edwardson is working two jobs just to make ends meet. She has given up on her dream of being an artist – until she gets a life-changing offer for one of her paintings. There’s only one catch: the mysterious billionaire wants to meet her in person.

Gregory Drago is a dragon shifter who’s quickly running out of time. If he doesn’t find his mate soon, he’ll lose control over his dragon’s storm power – and he’ll lose his mind, or worse. That’s when he comes across a mysterious painting of his dragon in a gallery. And not only is the artist the most gorgeous woman he’s ever seen, but his dragon immediately recognizes her as his mate. Now surely all that’s left before his happy ending is to show her his home and hope that a human can find happiness in the peaceful shifter town.

But Gregory isn’t the only dragon who’s taken an interest in Naomi’s painting. When a powerful fire dragon kidnaps Naomi, will Gregory be strong enough to save her? And can the strength of the sizzling connection between them protect their home from their ruthless enemy?

Single Title at this time, although it reads like it could be the first of a series… time will tell as always with Zoe Chant.

Mated to the Storm Dragon is a powerful story that if it isn’t the beginning of a “some day” series… then it should be.  Filled with secondary characters that I definitely want to learn more about, an intriguing dragon council and a small shifter town high in the mountains that just begs to have stories told about it.  So, yeah, you could say that this story captured my imagination and then some.

Gregory has reached the stage of his life where if he doesn’t soon find his mate he will face madness… and being put down by the dragon council.  Not a pleasant prospect.  Now  he’s been brought before them to answer for crimes he has not committed, but  he is the only logical dragon that it could have been since one of those crimes was allowing his image to be painted on canvas… by a human.  He needs answers fast but never expected to find his mate at the end of this journey or an enemy thought to have been vanquished forever.

Naomi is at the end of her rope.  Forced to finally sell a painting that she’d poured her heart into she’s hoping for enough cash to make the rent and survive just a bit longer.  Her lost dream of making a living through her paintings turned out to be just that, a dream.  But this storm dragon painting was so unlike her other work, almost as though the dragon on the canvas had called specifically to her.  One meeting with the buyer was all it took to believe in love at first sight – and the reality of dragons.  Naomi is in dire danger, Gregory is the only one who could possibly save her and in the saving find all the answers they’d ever had about finding that one perfect person for them… be it human or dragon.

Fast paced action, likable characters and the possibilities that could come from this one story made this a story that I devoured.  Sometimes a story simply speaks to us, and Mated to the Storm Dragon said everything perfectly.  I truly do hope that there are more stories planned one day with this group of shifters, they are intriguing, interesting and leap off the page.