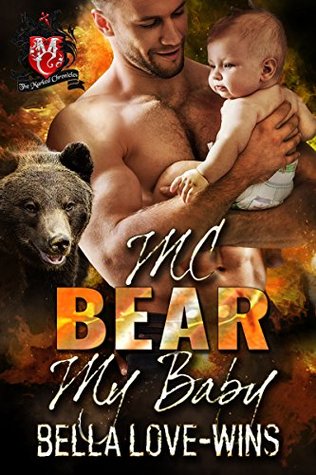 Tate and Molly have been hookin’ up for several months now.  Odd that the first he hears about her ex-boyfriend stalker is when he’s hired to protect her.  He and Molly will get that dealt with in their own unique way.  Jett has followed Molly across states, not willing to accept that their relationship is over.  He stalks her, leaves her frightening gifts and has broken into her home.  Molly isn’t safe at home with only her mother for protection, so Tate takes her back to the Beartooth Brotherhood’s compound.  At least there she’s better protected and if they can get their kink on in his room, all the better for Tate.

After an incident at an underground fight where Molly is injured, Tate’s bear shifter senses alert him to an astonishing fact – Molly’s pregnant, with his cub..  A simple protection detail, an easy occasional hook up just got a lot more complicated for them both.

MC Bear My Baby is a fast paced, sexy times, emotionally filled romance.   Toss in a few surprises along the way and you have a compelling story.  Tate has issues and his desire for Molly is going to bring them to the forefront.  This is a guy who never, ever figured on the family thing, never expected to find or need his mate and cubs were just not part of his plan.  But fate has other plans for him and Molly – one super bad biker dude is going to do some melting around his lady and his kid.  Jett is not going to go away peacefully, and will cause so much trouble before he is finally put in his place.  Two stubborn people will have to allow themselves to open up and trust in their emotional ties to each other.

Molly and Tate were such a fun couple, oh sure they got their kink on but they also have the love for each other that makes life worthwhile.  It’s an entertaining journey to their happy ever after.  If you love Shifter Romance and if Motorcycle Club Romance is one of your favorites then MC Bear My Baby should be on your reading radar.