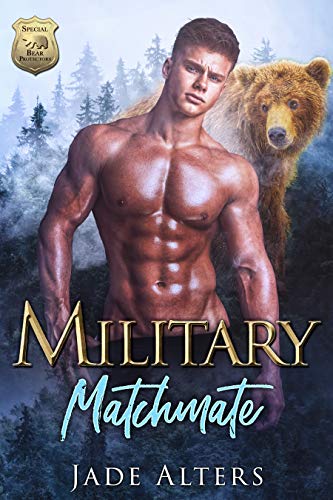 When my late husband was killed in battle, I shut off every desire.

Now my young son is hunted by criminals.

A gorgeous bear shifter saves my child’s life, and mine.

As spring turns to summer, this hot shifter awakens my passion.

To my shock, I crave his touch.

He wants me as his mate. And my son wants him as a father.

But this shifter is a soldier, and he lives a dangerous life.

I’ve lost one soldier. Can I risk loving another, when I know I might lose him?

‘Military Matchmate‘ is the fourth title in the ‘Special Bear Protection Collection‘, and Hunter is a character that we don’t often see in Shifter Romances, a shifter who has lost a limb during his military deployment.  I can think of only two other stories with a shifter who has had a limb amputated, and I read a lot of Shifter Romances.  It does put the character more in the ‘real human’ world though, for bad things can happen to anyone… even shifters.

I liked Cassandra and Hunter both individually and together.  Each has known hardship, for different reasons, and each has come out on the other side, if not whole, at least doing as well as they can under the circumstances.  Cassandra has her son to raise, her work as a nurse, and she gets through the days since her husband’s death.  Neither has dated much recently and both are somewhat pushed into the meet and greet military get-together – with surprising results since they only went to make those they love happy.  Hunter certainly didn’t expect to find his mate, and Cassandra never expected to feel the spark of attraction after her husband’s death ever again.

I adored Jacob, Cassandra’s son.  He’s sweet and determined to get his mom dating again.  If his reasons are a bit self-serving, they are also certainly understandable.  But his matchmaking efforts may have paid off even as they have placed him and his family in dire danger.

‘Military Matchmate‘ is intriguing, dangerous, and definitely sizzling as Hunter and Cassandra discover the love and passion between them – even when there is danger all around them.  I was easily caught up in their story and would recommend it.  My only thing… is something small and not story related.  Covers matter to me, they help me define characters – and while certainly hot, this male isn’t old enough to be the Hunter I met while reading his story, IMO.  *shrugs*  It’s a small thing, perhaps only to me but sometimes those details matter more than we think as we fall into new worlds.