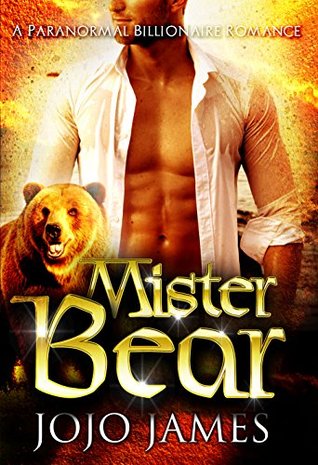 When struggling waitress Theresa Cole was matched up on a date with enigmatic billionaire Jameson Bulder she felt as if all her dreams had come true at once.

But Jameson was a man who was never looking for anything serious. This was because he knew that if a woman got too close to him then his secret life as a WereBear would be revealed and it would all end in tears.

However, Jameson felt different about Theresa and he knew it would be hard to let her go. Could she keep his secret? Or might she have secrets even bigger than his?

Mister Bear by Jojo James got a 3.5 stars rating – it’s a good, solid story with a different slant on Shifter Romance.  In this author’s world there is a definite difference between Shifters and Weres.  Shifters can shift from human to their animal at will, at any time.  Weres, on the other hand, cannot – they only shift half-way to their animal and only during the full moon phase and during intense emotional moments like anger or sex.  It’s a very defined approach to this genre, it makes the Change more reminiscent of the classic werewolf stories and movies.

Jameson is a self-made billionaire.  He lives in a manor, has a full staff and his own right-hand man, driver Alphonso.  When we first meet Jameson he comes off as cold, calculating and utterly clueless about this aura of wealth and aloofness that he gives off.  He is searching for his mate and since he hasn’t found her yet, and he is rather reclusive he’s come up with a plan.  He takes out a personal ad offering one date, a night of dinner and conversation asking for a photo and contact number.  And, sadly, since he refers to himself in the ad as a billionaire with his full name he often gets the type of response you’d expect.  Until Theresa, she took him by surprise.

Theresa is an artist with an art degree working at a bar as a waitress.  It’s not the greatest job, but she’s sort of content since her artist muse hasn’t produced any memorable work lately to pay the bills, something has to.  Her best friend, Ava has married well to a man with money and is often found at the bar with Theresa trying to meddle in getting her to date one of the rich men her husband knows so she can also live the life that Ava has now.  Theresa loves her friend, but she’s not looking for what Ava has.  On a dare, Ava sent in Theresa’s photo and contact information to Jameson’s personal ad.  And while she didn’t expect anything to come of it, she simply rolled her eyes and laughed it off… for the most part.  Until he called and arranged for their one date – that night.  Both of their lives were about to change.

Once I got into the rhythm of a different slant on Shifters I did enjoy Mister Bear.  Theresa and Jameson make an interesting couple.  Once past their first date, Theresa takes no crap from Jameson.  He’s so used to his wealth opening doors and impressing people that he does things almost without thinking to show off that wealth.  Theresa’s reaction to his first Change around her was very realistic for a woman who doesn’t know shifters or weres exist outside of fairy tales and folklore.

They are two people who obviously care about each other – but getting to their happy ever after ending is quite a journey.  Both are going to need to make major adjustments in their thinking and their lives.

Mister Bear is an interesting premise – and I will be completely honest in that I don’t know if I would enjoy this type of Shifter Romance more than once in a while.  Right now, I’m only finding this novella by Ms James, but I’ll be on the lookout for others and try again with her next work.