My Curse To Bear by Olivia Arran & Alana Hart 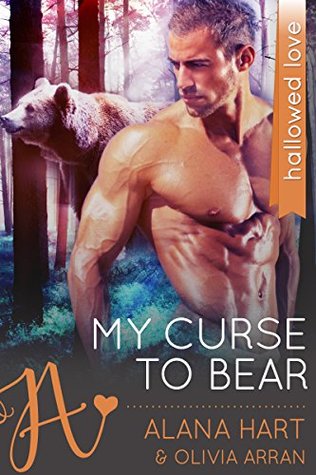 A witch without power…
Merrie Havencroft hasn’t got time for men. She’s too busy trying to run her shop and prove to herself, and her family, that she is not a failure as a witch.

A bear without a mate…
Bear shifter Craig Everson knows all about feeling inadequate. Years ago, he broke a witch’s heart — and got himself cursed. He can never be happy in a relationship again…not until he finds his true mate.

When Craig bumps into curvy Merrie, his passion ignites. His bear is certain she’s their mate — theirs to claim, to bring to the heights of pleasure, to cherish and protect. Craig knows he wants her with every inch of his being — but can he ever trust another witch?

A dark secret that could end it all…
Merrie’s heart says Craig is the one…but when she uncovers a shocking secret from her past, will it destroy their chance at happiness?

My Curse To Bear introduces us to the Everson brothers, a rough and rowdy group of bear shifters who in their near century or more lives have yet to find their true mates.  But that is about to change as they fall one by one.

Eighty some years ago Craig Everson made a huge mistake.  He’d dallied with a woman who he had almost felt was his mate, but his bear didn’t agree.  He tried for a bit to force the issue, but in the end decided to let her down easily.  She couldn’t know that he was a shifter who would have only one mate for his life, one woman who would complete him… and, unfortunately, she simply wasn’t the one.  To say that Meredith didn’t take rejection well would be an understatement.  And while she had known he was a shifter and loved him, Craig had no idea that Meredith was a witch.  Until she laid one parting curse on him before walking out of his life..  A curse he would carry until his bear found his mate.

Merrie had her small shop, Magical Gifts, a home, a business and well that was about it.  She’d left her home in the city leaving her mom and sister behind.  She’d never really fit in with their amazing abilities and honestly, she was tired of trying and failing.  She was content in this small community, the tourists gave her a living and for the most part she was happy.  A surprise visit from her sister prompted a visit to the grocery and the bakery – and it was there among the deserts that she met her destiny in the form of one huge, handsome bear of a man who literally swept her off her feet.

Craig knew almost immediately that he’d met his mate, the… evidence… was quite clear.  His bear agreed wholeheartedly.  Yet, Merrie looked so much like the witch who had cursed him those long years ago it was uncanny.  Logically he knew it wasn’t possible but still he held back, hedged his bets so to speak on giving her vital information.  In the end he held off too long – and would pay the price.

In the world building for My Curse To Bear, we’re presented with a few interesting twist and turns in the story line.  And, no, I can’t really say what those are without giving away far too much.  But I think you’ll pick up on them rather quickly once you begin reading.  Craig and Merrie have a lusty, insta-lust relationship.  He may know she’s his mate, but she has no clue only that she cannot resist this man.  When truths begin to tumble out, from many different sources Merrie is hurt, furious and done with Craig.  It will take a near tragedy, some magic and hearts that are willing to forgive, forget and move onward for them to reach their happy ever after.

I enjoyed this beginning story in the Everson Brothers series and have picked up the next brother, Sheriff Ryan Everson’s story – looking forward to getting deeper into this series.  If you love Shifter Romance, this title and this series is one that I believe you’d enjoy.  A good story, likable couples and engaging secondary characters.