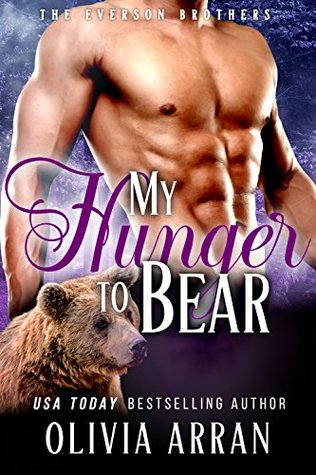 Throughout The Everson Brothers series we’ve gotten glimpses, snippets of the love that Ralph has for Connie – and the hatred that Connie has toward Ralph.  It’s been painful and sad to watch Ralph sink further into despair over his mate.  And now we know what happened in their past to make Connie believe there was no future for them at all.

For close to seven years Ralph has stuck to the background of Connie’s life.  He watches over her, tried to keep her as safe as he could from a distance.  Yet when the fire that destroyed her bakery also harmed his mate, well he’s had enough of playing the waiting game.  Human life is short, and they’ve wasted enough time doing this dance over what she believes as truth and what he knows are lies.  Why her father would lie to her on his deathbed Ralph has no ideas… but he did and it changed the course of their lives up until now.  Now she would get some truths from him that she may not be ready to hear, but it’s time for her to know everything, and if she still walks away from him at least he knows he did everything he could.  Before he lives the rest of his life in loneliness and goes slowly mad from losing his mate.

An addiction, no matter to what, slowly destroys more than one life.  And Connie’s father’s addiction ruined his business, his friendship with Ralph and left his daughter hating the man she’d loved.  In this story there were no winners, not really.  Both Ralph and Connie had lost so much due to one lie, and for them to have any type of future Ralph had to tell her some very hard truths.

My Hunger To Bear was a very satisfying story bringing this series to a conclusion.  And, interestingly enough, we finally got to know Pa and Mom’s true names, and chuckle when none of the mates knew who was being spoken of.  The strong family ties, the deep abiding love and the magic of the soul bond made this series such a delight to follow.  If you are addicted to series, if you love Shifter Romance then this is a series that I would strongly recommend.  Solid stories, engaging couples, interesting secondary characters and a charming small town.  There’s lots to love in The Everson Brothers Series.  Indulge yourself and enjoy.