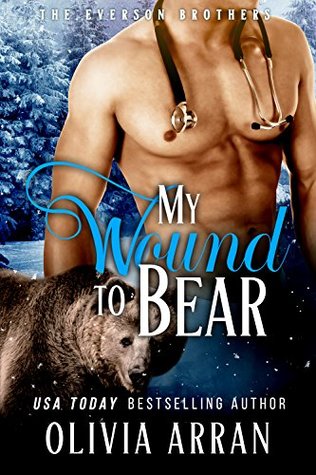 A broken woman…
Gina is a survivor. After years of captivity she’s now free, her child has been returned to her, and she owes her new pack everything. She needs to be strong for her daughter, to look to the future. After all, she’s a human living in a world full of shifters—strength is everything. But how can she survive when she’s broken inside?

A healer…
Doctor Jack Everson is home at last, and this time it’s for good. He’s tired of living life alone with no mate to complete him. When duties take him up to the Smithrock wolf pack, the last thing he expects is to run smack bang into his true mate in his home town. Gorgeous, with curves to die for, she’s everything this bear shifter ever dreamed of. So, instead of pinning her against the wall and staking his claim, he offers her a job. His brothers think he’s an idiot. Hell, he thinks he’s an idiot. But her eyes are haunted by the past…and he’s praying for a holiday miracle.

This story is also available in the holiday bundle: Shifters in the Snow: Bundle of Joy

I’ve sat here for a few moments trying to decide how to convey to you just what a beautiful, emotional story of survival and hope for the future My Wounded To Bear truly is.  We first met Gina, her daughter Lizzie and the other women and children who were rescued from a crazed, manic sifter with diabolical plans in the earlier series by Olivia Arran, True Mates.  The women had been kidnapped, captured and held prisoner to be used as breeders, their sole purpose to have shifter children to be raised as part of an army under this maniac’s control.  There is, of course, more to it than that so I would suggest that you check out the True Mates series for an amazing story line.  Flash forward to the present, the women and children rescued are now living with their rescuers wolf pack, attempting to learn how to be normal, unafraid people once again putting the victim status behind them.  It’s not easy, these women and children  have been through such a horrific experience that some are perhaps too shattered to ever fully recover.

Jack Everson has returned home from his life in the city.  He is alone, still without his mate and so very tired of his life.  Although it’s never a plot line or acted upon, we’re given to understand that Jack has simply reached the end of his tolerance for life, and if it were possible for he and his bear to agree on it, he might simply let his life slip away.  He has come home to be with his family in a depressed state of mind.

When on a trip to the near by Smithrock wolf pack, where the survivors are now living, Jack does his rounds of checking on the women.  He has good hopes for some, concern for others and he will continue to keep a close eye on them all.  Perhaps the last thing he expected was to look up from an impromptu snowball fight with two adorable children, and come face to face with his mate.  Gina.  Mother of Lizzie and a survivor of horrors he can only imagine.

Gina never wants another man near her.  She’s barely holding on, trying to survive and take care of her daughter.  She doesn’t need the complication of sparkling eyes, or a laugh lined face… or that body.  No. she’s not interested.  Her walking nightmare is not over, she’s holding on to secrets and she will never trust another man again.  If all that’s true, why the interest, the tingles around Doctor Jack?

In My Wound To Bear, I was expecting a light holiday Shifter Romance.  What I got was an emotional, touching look at true love finding the way to heal a loved one and accept them exactly as they are… past and all.  This one will touch your heart.  And I highly recommend it for anyone who believes in the healing power of love.

I purchased the Shifter Bundle – Shifters in the Snow, Bundle of Joy.  It is also available as a single title now.