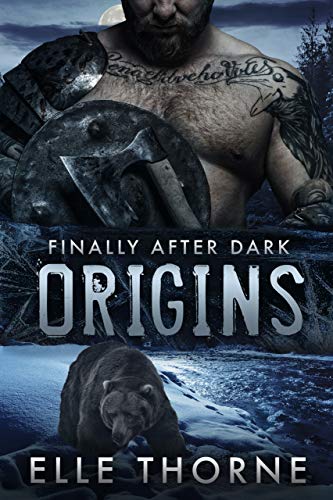 Many millennia ago, a group of Vikings raided a village. As fate would have it, this was the wrong village. It was home of the mighty witch Freyja.

Calder was one of these Vikings. He and his brother lead this band of large, tattooed men with their gruff ways. They’ve found that one of the villagers’ guests has a wealthy husband and can bring a healthy ransom. An amount of silver that will provide great wealth to these Viking fighters.

Brenna can’t tell her captors that she won’t be able to secure a single piece of silver. Holding her for ransom is pointless. When one of her captors decides that he wants her for a night’s pleasure, she’s stunned to discover that another saves her. A huge man with tattoos and wielding an ax comes to her defense. Now she’s beholden to him.

When Freyja returns to her village to find that the men have been slaughtered and the women and children have been taken havoc, she renders a punishment that lasts an eternity and creates two new species that will roam the earth in perpetuity.

She also puts Brenna in a difficult decision of choosing love over duty.

‘Origins‘ begins the ‘Finally After Dark‘ subseries of the larger ‘Shifters Forever Worlds‘ series with a fascinating look at the myth and legends of the Valkyries and the Berserkers very beginning, how two great myths got their start through pillaging and revenge.

I had read this series, by accident, out of order so ‘Challenge‘ was my first step into this world – and in some ways, I’m glad that it happened for me this way.  I think I have a better appreciation of the chaos to come, knowing it existed before learning how the feud began… but that’s me, it worked this time by reading out of order but I certainly don’t recommend doing that.

Brenna and Calder have an intense relationship that only grows stronger as their mate bond takes hold and choices for their shared future must be made.  Everything you need to know is in the cover description – the rest is such a good story, a building of a legendary fight between two newly created entities (and enemies) as a direct result of Calder’s men’s actions.

‘Origins‘ is intense, sizzling, a puzzle working it’s way to an unknown answer and two people who have been through hell itself finding a future together.  If you love a good Paranormal Romance or Shifter Romance adventure, then you’ll want to pick up this series.

I had read this title when it was in Kindle Unlimited.  It is no longer there as Ms. Thorne’s titles can now be found across all vendor platforms.