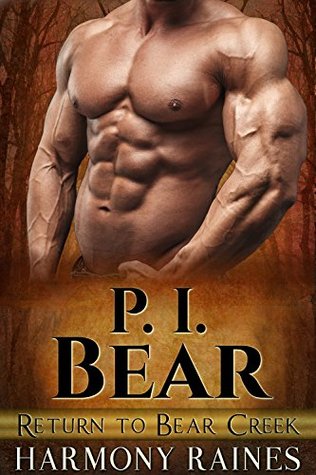 Bear shifter, Lia Rivers, is on the run. Falsely accused of theft, she arrives in Bear Creek with plans to disappear into the mountains for a few weeks. Instead, she takes a job at the local newspaper. There she meets Sam Spencer, a private investigator, who threatens to make her go weak at the knees, and a few other places…

However, she hates the idea of putting him in danger and keeps the truth from him. But her past is threatening her future, and Lia begins to understand that to be truly free, they will have to work together to figure out who set her up.

Sam Spencer loves his job as a private investigator. Helping people is what he does, even if the pay isn’t great. Yeah, he’s got a soft spot for those in need. He has an even softer spot for the woman who just entered his life. So what if she attacked him with a broom, whilst screaming like a banshee! She is his—and nothing is going to change that fact.

Not even the secret she is hiding from him.

I truly enjoyed myself with P.I. Bear.  Sam and Lia’s story is straightforward, no hidden issues to jump out at them, no denials of who and what they are to each other.  Even the reason that Lia is hiding in Bear Creek is not drawn out once they acknowledge that they are mates.  It’s brought out, talked about, a plan made to resolve it and dealt with.  Yes, there is a mystery to solve, plus an additional side mystery that they both get involved in solving but it simply is a problem, a couple that deal with the problem and then go on with their lives happily.  I love twists and turns and surprises as much as the next reader, yet sometimes it’s refreshing to have a very “this is it” type of story that is all the more realistic for that straightforwardness in delivery.

We get a chance to catch up with a few of the characters we know and love.  It’s always fun to have Fiona drop by any gathering.  There are a few chuckle worthy moments on that side mystery as well.  I’m wondering now if we’ll get the chance one day to learn more about that neighboring “cougar” town.  It sounds very intriguing indeed.

In all, P.I. Bear is a fun, sexy story with a bit of a mystery … and you’re going to do some eye rolling at that reveal, as well as giving in to some ironic laughter.  I enjoyed myself, had fun with Sam and Lia, and now I’m waiting for one more story.  I don’t really want to see this series end, but I’ve loved every step of the journey.  So, at least one more story to go, and I’m looking forward to that one.

I’d recommend this story and the entire series to any Paranormal Romance or Shifter Romance reader.  You’ll find a good story, interesting characters, sexy times and the chance to catch up with old friends.  Everything I look for in my Shifter Romance reading.