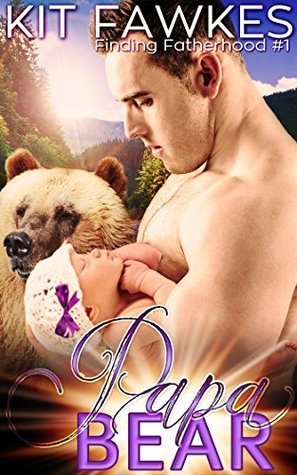 U.S. Marshal and bear-shifter Lucas Anderson failed to protect his pregnant witness, so when she asks him to adopt her daughter as her dying wish, he can’t refuse. Angel is a sweet baby, and he soon feels like Papa Bear, and maybe she’ll be the key to help him wear down his mate’s resistance.

Libby has shut him down for months, and he knows they belong together, but she won’t give him a chance to prove it. Can the stubborn bear and his baby win her over to their ready made family? Can he keep his mate and child safe when the cartel that killed his witness comes after him, putting all three in danger?

U.S. Marshal Lucas Anderson finds himself a father in a most unusual manner.  He and his partner are protecting a pregnant witness who is scheduled to testify against a nasty cartel leader.  Unfortunately, just as the witness goes into labor and they leave the safe house gunshots ring out and Astoria is hit.  She will not survive and makes Lucas promise to raise her daughter, to protect Angel from life in foster care and especially from her biological father, the nasty cartel member.

Lucas finds himself an instant father – and a man with a mate who wants nothing to do with him.  Yeah, he’s got his hands full now.

Libby has been avoiding Lucas’ enticements to date and get to know each other.  While she might find him handsome, and admittedly sexy as sin, she’s got a past that strongly keeps her away from involvements – especially with a man who wears a badge.  Yet one adorable baby, one determined man and one extremely dangerous situation is about to change Libby’s mind.

Papa Bear is a fun, sexy and entertaining story.  It’s a quick read, but packs a powerful story into a short space.  Truthfully, it’s easy to see very early on who is the person who gave away their location which resulted in Astoria’s death.  But there is still plenty of action to come, and he certainly isn’t the only bad guy we’re going to encounter.

Libby comes off as brash, and at times it’s difficult to like her let alone cheer her on to her happy ending.  She’s been through a lot in her lifetime, and she definitely has reasons for her prickly attitude.  When she finally softens towards Lucas and Angel we get the chance to see the woman Lucas fell for.  Libby is by  no means a soft heroine, but she has potential – and isn’t that true about all of us.  While there are some steamy, heated moments between Lucas and Libby, the majority of the story is the danger, the mystery of who ousted them and the drama that Libby brings to the situation.  Overall, it’s a very compelling, quick story that any Shifter Romancer reader would enjoy.

Here’s one interesting tidbit of author information.  While you’ll often (or always) see Kit Fawkes & Kit Tunstall as co-authors on Shifter Romances – did you know that they are one and the same author?  There was a time, and some authors still do this where for every genre they write in they have a specific pen name.  For Kit Tunstall her Paranormal pen name is Kit Fawkes, hence we get two writers in one.  *grin*