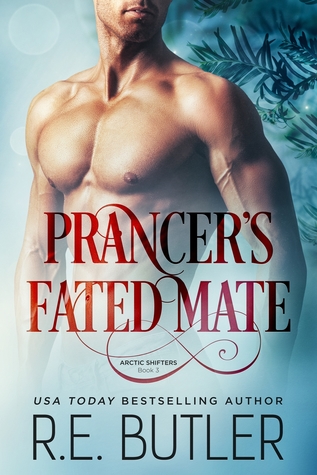 Kerri’s excited to be able to help plan the wedding of her sister’s friend. Decorating her sister’s middle-of-nowhere cabin and taking some R&R after finally finishing cooking school is exactly what she needs before she starts her job hunt. Unable to sleep, Kerri heads out into the woods before dawn on Christmas Eve to cut pine boughs to decorate the fireplace mantel. It’s cold and dark, but Kerri finds herself enjoying the early morning walk in the woods. Until an unwanted guest in the form of an enormous polar bear intrudes on her quiet morning.

At dawn on Christmas Eve, Sullivan, an arctic shifter, goes with two members of the NPC security team to scout out the location for a close friend’s wedding. Deciding he’s a better hunter in his shifted form, he chooses the polar bear, his favorite of his four shifts. Heading into the woods that surround the cabin, he follows the scent of something amazing and comes face to face with a beautiful woman, who watches him shift back into his human form and promptly passes out.

When Kerri awakens, she feels immediately connected to a man she’s pretty sure she saw change forms from bear to human. She can’t explain why she feels drawn to him, but he can. He’s a quad shifter, part of Santa’s sleigh team, and she’s his fated mate. For a human who never realized that shifters, or Santa, were real, Kerri has to make a choice…fast. Either she’s waiting when Sullivan gets back from the Christmas Eve run, or he’ll leave her behind. Will Sullivan get his Christmas wish for Kerri to accept being his mate and join him in the North Pole, or will this be a blue Christmas for everyone?

Kerri only gets to see her sister, Charli once a year now that she’s living up North with her husband and kids.  You’d think they could get down from Canada more often, but she was grateful for the time they did have.  After all, she’d just finished up school and still hadn’t decided where to start her career.  This year she has the fun of helping to plan a special Christmas Eve wedding for her sister’s friend Merri.  And that was why she was out here at Charli’s deep in the woods cabin.  She’d come in a few days early to clean and decorate and now the day was here.  A last minute inspiration for the mantel wold cause her to be out in the woods at exactly the right moment for destiny to strike… kinda like it was fated or something.  *grin*

Prancer’s Fated Mate once again takes us back to these quad shifters, the special Santa’s reindeer team for some hi-jinks, some fun, and definitely some sexy romance of the forever mate kind.  If you’ve followed the series so fr, then we’re going to meet up with old friends and add a couple new ones to the group.  Kerri is a lovely lady who is looking for something special to happen, she’s not sure what but she knows it’s coming soon.  Sullivan has that same feeling.  That maybe this is his year for finding his fated mate.  He has a wedding to attend but who knows what magic can happen.

Enjoy a fun, lighthearted and definitely sexy Christmas Eve romance with the folks from NPC, it’s gonna be magical.