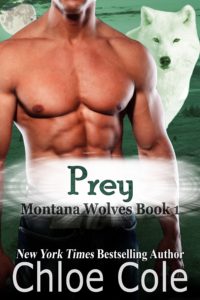 Photographer Amalie Baptista is appalled by the hunting of wolves in Montana. She hopes that photographing these savagely beautiful animals will call attention to their plight, but her mission ends abruptly when she’s attacked by one of the animals she’s sworn to protect. When a gorgeous stranger saves her from certain death, she can’t seem to fight the attraction…but giving in could be giving up life as she knows it.

Alpha male Liam Albrecht is breaking every rule for the curvy, captivating Amalie, risking his place within the pack and his own life to protect her. As discord among the clans reaches a fever pitch, he must find a way to save her from the monsters among them.

Prey is a short and very sexy introduction to the Montana Wolves series.  Although the book is indicated to be erotica, I found it to be no more so than most shifter romances today.  I expect hot and sexy shifters who cannot keep their paws or ahmm their hands off of their mates.  So that there are sex scenes, vivid sex scenes in this story was no true surprise.

Amalie was happily heading for her week in nature, spending time photographing the wilderness and hoping to help still the raging anger among people at the natural wolves in the area.  Wolves were majestic creatures and she was determined to show them in a non-hostile framework of her photography.  Unfortunately for Amelie, she encounters a not so natural wolf while checking over her maps – and is attacked with only a highlighter and a coffee thermos as weapons.  She was bitten and believed she would die in the Montana wilderness that she so loved.  Instead of death, a white timber wolf emerged from the trees and immediately began defending her by attacking the other wolf.  Before she blacked out she was certain that the white wolf who had stood over her morphed into a man with the tenderest eyes.

Liam knew there would be hell to pay for his actions.  He not only stopped another shifter from making a kill, he’d brought the human into his home under his protection.  The surrounding pack leaders would have his head, and her life for saving this amazing woman – who even now was beginning to turn into what he was.

Even though Prey is a very short novella, I found myself captivated by the story and the glimpses of the lives of the other members of the pack.  There is an additional reason why Liam’s pack is so fearful of and has such hatred toward humans.  The fact that Amallie won’t be human for long seems to elude them all.  There is a very strong sexual pull between Liam and Amalie – is it the turning fever or perhaps his true mate.  There is also a villain to watch out for in the future stories in the Montana Wolves series.. he’s shadowy for now, certainly pure evil.  And I doubt we’ve seen the last of him.

If you love shifter romance, then I would recommend Prey and the rest of this series to be added to your reading list.  Short, sexy and sassy it will give you a delicious taste of what is to come.