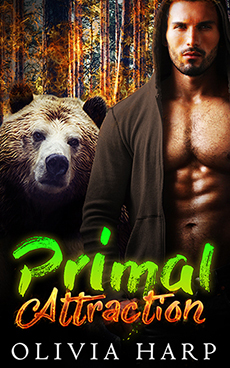 Faith Donovan has no place in the world. Being a vampire in hiding, she struggles with the isolation and loneliness necessary for her survival–a struggle that lands her in dangerous territory when she runs afoul of a coyote shifter. Luckily, a gorgeous, hot-as-hell tank of a ranger comes to the rescue… and might have stolen her heart in the process. There’s just one problem: he’s a bear shifter, and her natural enemy.

On top of that, Faith has given herself away, and ends up being stalked by an old nemesis, hell-bent on settling a deadly grudge.

Maverick Castle is a wild, untamed, arrogant bear shifter dedicated to only two things: himself, and his duty to defend his territory from the encroaching Shadowlands. He’ll be damned if he lets the unnatural threat drain the life out of the world he’s vowed to protect.

But all of that changes when he sees Faith. His bear goes wild at the sight of her, declaring her his perfect mate. And Faith needs protection, too. Desperate to save her, he lets her drink from him. A move that has far more dangerous consequences than anything he’s ever faced before.

The Shadowlands Bear Shifters series is such a fascinating blend of the paranormal world and the shifter world. – and yes, in many ways they are two separate worlds.  Add into the mix the horror of the Rot seeping into our reality and destroying everything it touches – this becomes an intriguing series where the blending brings us interesting characters and events that we might not have encountered before.

The pairing of a vampire, Faith, and a shifter, Maverick has been done but I don’t believe the twists and turns that this couple will go through has been offered to us very often, if ever.  Although you can sense Faith’s power from the beginning, you’ll also feel her vulnerability, her sadness that comes through the attitude.  Maverick has her figured out very early on and his fascination with her is obvious.  His bear, who usually is very quiet and beneath the surface more than the rest of the clan definitely perks up his head in interest.  Faith has a hundred and one reasons why they couldn’t possibly work as a couple – and that might be true if you discount fate.

The road to a happy ever after is not going to be easy for Faith and Maverick.  The plot developments and twists will have the reader on the edge of tension and glued to the page.  Their chemistry is off the charts so some very sexy moments are expected.  There are a few surprises, some avenues that you might not have walked down before, and an entertaining and likable cast of characters to catch up with once again.  I like stretching my imagination to cover what I’m reading and make it real in my mind.  It’s always good to exercise your imagination, and there were some scenes that were intense and interesting to picture.

I enjoyed my time in this world, and definitely am looking forward to the next story in this series.  If you love Shifter Romance, especially with a few twists then I believe you’d enjoy the Shadowland Bear Shifter series.