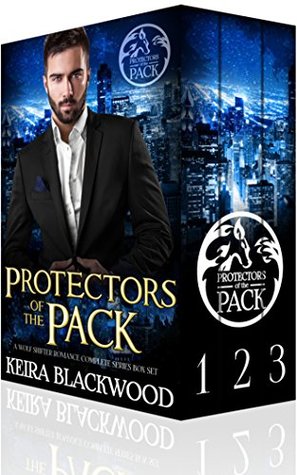 Running from trouble, running to trouble, and confronting the source. Two packs come together to defend against a mercenary biker gang. Expect motorcycles, wolves, a case of mistaken identity, a reluctant assassin, fiercely protective shifter men, three very different couples, and a whole lot of fun.

Bodyguard
Forced together from worlds apart, it wasn’t what they wanted. But needs can change…

Enemies
Sometimes love means taking a bullet. Right in the a–

Heir
I’ll show you what it means to be mine…

I’ve read Bodyguard – Enemies – Heir and reviewed all three.  I absolutely loved them all.  The stories are intense, detailed, an involved plot, likable main characters and secondary characters you cannot wait to read about in their own stories.

Now, all three stories are available in one box set.  Grab them.  You won’t regret it.

If you love Shifter Romance then you’ll enjoy these three stories, and you’ll get to read them back to back which makes the series come alive even more when you don’t have to wait months for the next story to come out (like I did originally)  *grin*

I would highly recommend this box set, the stories within are amazing.