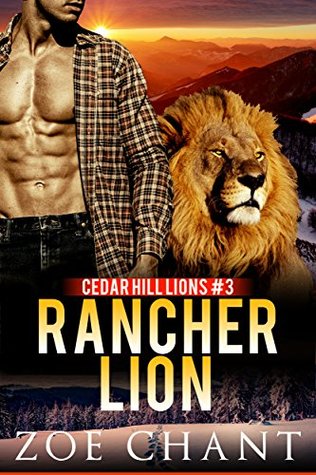 Sasha Stevenson grew up in the backwoods, so she ought to know trouble when she sees it. She should have known better than to be fooled by a man like her ex-boyfriend, who turned out to be a wolf in sheep’s clothing – literally. Now she’s on the run from him and the rest of his pack of shifter bikers. Out of time and out of options, Sasha has no choice but to take refuge in an old cabin, and hope that the owner doesn’t mind…

Lion shifter Joe Whittaker will be the alpha of his pride some day, but for now, he’s happy with his quiet life working on his father’s ranch. There’s only one thing missing: his fated mate. But when he investigates why his old hunting cabin has an uninvited guest, he doesn’t expect the smoking hot woman inside to be the one he’s been dreaming of…

Joe and Sasha may have found each other, but there’s just one problem: she’s terrified of shifters. How can Joe share his secret with her – especially when her ruthless ex and his crew will stop at nothing to get her back? Can Joe keep Sasha safe and win her heart?

Sasha has had to learn a lesson the hard way.  Just as there are bad people among humans, there are also bad shifters.  It’s not fair to judge an entire species by the actions of a few – but it’s also difficult to trust again, especially when your life is at stake.  Sasha is on the run from an ex-boyfriend and his gang, the boyfriend who forgot to mention he was a wolf shifter.  Now he wants her back under his control or she can die, her choice.  Her survival instincts kick in and Sasha runs until a storm forces her to take shelter in what appears to be an uninhabited hunting cabin.  She’s safe for the moment, but little does she know her life is about to take a turn for the better – if she can risk trusting another shifter.

For the most part Joe was content with his life.  He had the ranch, he was basically an Alpha in training as one day he’d take over that responsibility from his father.  If he got a bit misty eyed when he watched his cousins with their new mates, well it was natural.  The guys were lucky and the ladies were amazing.  But it also brought home that he had yet to find his fated mate.  He knew that not everyone was fortunate enough to find their mate.  His father had loved his mother in his way, but she hadn’t been his mate – and even before her death, that showed.  Joe wanted the real thing and his patience was running short.

While out checking the ranch property, Joe came upon some tracks that were unusual.  It appeared that several animals were tracking a human.  Animals that normally do not just hang out with each other.  The human tracks lead him to an unexpected spot, his hunting cabin.  And what was waiting within those walls changed his world.  One beautiful, frightened human on the run.  One who was terrified of shifters.  One who was his fated mate.  Life gets complicated at times.

I enjoyed Rancher Lion.  Sasha and Joe were perfect together.  The action was fast paced, definitely sexy moments and love won over fear – which is always a happy ending.  Sasha is one amazingly brave woman, even when she believed otherwise.  Joe certainly showed his Alpha capabilities, his determination and his support of Sasha was an example of love all it’s own.  I really enjoyed this couple.