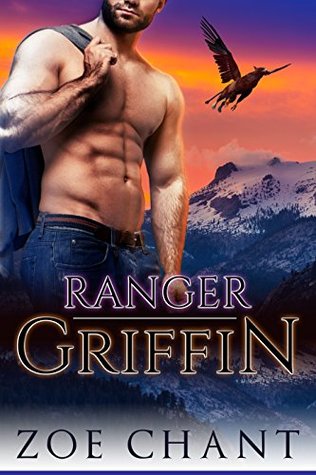 Ranger Griffin is a short, sexy, engaging Shifter Romance that hits all the right buttons for enjoyment.  It’s a Stand Alone Title – although there are two secondary characters that I would certainly love to learn more about at some point in time.   There are always possibilities.

Emily is making the trek into the small towns surrounding a beautiful national forest during the winter.  There have been reports of a, well unimaginable creature and she’d convinced her boss that the story was worth investigating.  Okay, so the reports of a prehistoric like flying creature is the stuff of fancy and childhood, as an investigative reporter that “what if” is always running through her mind.  The very last thing she expected was to have that thing of imagination run her off the road – or to meet a man who would be the answer to all her dreams.

Gabriel was making one last flight over the parts of the forest he considered his area.  As a monster in his own words, the flight in his Griffin form was rather easy as he and his Griffin kept watch for humans in danger or at risk from their own foolishness.  The storm was getting worse and he was close to turning for home when he spotted a car where it certainly should not be – high up in the branches of the trees.   In his search for the survivors of that wreck he had no idea that he’d be searching for the woman who was his future – his mate.

I had fun with Ranger Griffin.  Emily and Gabriel are perfectly matched, and each brings something unique to the other.  Their romance is certainly hot and sexy, but the charm of the story is clearly the acceptance and the freedom that this couple gives freely between them.  The answer to the bizarre sighting that sent Emily here in the first place is both terrifying and somewhat amusing as well… and it adds in possibilities for some secondary characters to one day have their stories told, at least I can hope for that.

I would not hesitate to recommend this title for any Shifter Romance or Paranormal Romance reader who enjoys a good story,  likable characters and a hint of mystery.