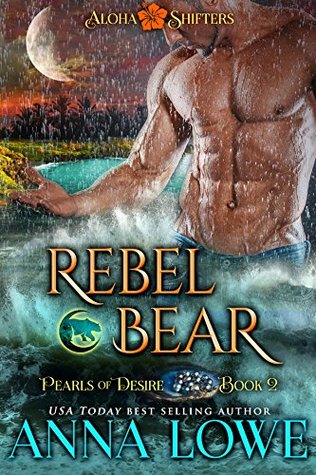 Up-and-coming supermodel Hailey Crewe can’t wait to escape the limelight and return to the modest, anonymous lifestyle she once led. Escaping literally? That was never part of her plan. But when an unwanted suitor — and her scheming mother/manager — go a step too far with a surprise Hawaii wedding, Hailey becomes a bride on the run. Before she knows it, she’s not only being hunted by a greedy oil tycoon, but by his creepy security force, too. A good thing she bumps into her very own Lancelot at exactly the right time.

Bear shifter Timber Hoving is just another Special Forces vet slowly adjusting to island time. That is, until an irresistible stranger rushes into his meticulously organized world. Before Tim knows it, his human side is wrestling with temptation, and his bear is head-over-heels in love. But Hailey’s first encounter with shifters is a terrifying one, and Tim can’t reveal the truth about himself without losing her forever. Worse, sinister shifter forces are closing in, following a ruthless agenda of their own. They’ll stop at nothing to capture Tim’s destined mate — dead or alive.

What has always drawn me to Anna Lowe’s books are the word pictures she paints.  I can smell the salty tang of the ocean breeze, I can see the mischief in Joey’s eyes, I can taste the Hawaiian lunch truck food on a picnic at the beach, I can feel the growing attraction between Hailey and Tim… and I can sense the concern of his brothers, friends and fellow shifters as well.  When an author can take the time to paint a word picture that transports me into their world, allows a story to build at its own pace and gives me an exciting story with several layers – then I’m going to be hooked on their work for a very long time.

I was easily swept into the world of the Aloha Shifters once again with a very dramatic opening scene that sets the pace for the rest of Rebel Bear.  Tim may now be ex-Special Forces but he has no intention at all of getting involved in the mad hunt for the woman running desperately searching for a hiding place or to escape these goons chasing after her.  No, he’s no knight in shining armor these days — but his bear has a different reaction.  Help her. Save her. Destiny.  He might have been successful in ignoring his bear if it weren’t for that smell of shifter excitement of the chase in the air.  Reluctantly Tim heads for his future, one that will bring him everything he ever wanted – if he can overcome one woman’s fear of the animal in him.

Hailey had been completely duped by her mother.  She knew this dress was the wrong color for a bridesmaid.  And that suspicion came true when the jerk she’d been about to break up with tries to stage a forced wedding/proposal in front of a huge crowd, reporters at the ready to capture the whole farce.  Since Jonathan wasn’t accepting her repeated No, Hailey did the only thing she could think of… she ran.  Which might have worked if there weren’t several henchmen of Jonathan’s after her as well – or if she hadn’t backed herself into a corner with no escape.  Why she trusted the strong male voice on the other side of the door she had no idea, but she did, and really he was her only way out of this mess.  Putting her faith into a stranger’s hands might not  have been the logical choice, but she felt safe and that feeling alone was worth the risk.  Soon she’d be accepting the kindness of strangers… and entering into a world she never dreamed existed.

Rebel Bear brings us an engaging, at times intense, romance with more than its fair share of potholes.  Tim knows that Hailey is his mate but her intense fear of animals from something in her past, to the onslaught of her fears when encountering what cannot be true in her world will keep Tim from confessing his own secret.  He will do everything in his power to keep Hailey safe from those who want to do her harm… but if he can figure out a way to have her in his life that would be the perfect solution.  There are a variety of villains in this story.  Some are truly vile and dangerous with an agenda that has been planned for a very long time.  Others are the more selfish, self-serving kind, Hailey’s mother in fact.  And an older known enemy will be brought into this current situation with menacing possibilities.  There is a bit of several things going on in Rebel Bear, some that will, I’m sure, be revealed in the rest of the series.

I loved Rebel Bear, easily got caught up in this magic once again.  We’ll run into old friends, learn a bit more about several situations and simply sit back and enjoy the unfolding romance of Tim and Hailey.  I would highly recommend this story and series to any Paranormal Romance or Shifter Romance reader who loves a good solid story, believable characters, secondary characters that bring the book to life, vile villains to hate and a strong love story to enjoy. (and yes, I know this review went on too long… but I did love this story)

Available in a variety of formats and for the Kindle.