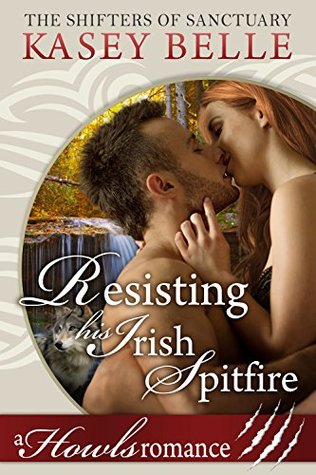 Even broken Lycans deserve happily ever after.

Dakota Stone knew his PTSD and irreparably damaged body made him unworthy and condemned him to a mateless future. Resigned to his fate, Koda abandoned his pack choosing isolation over pity. Though not content, he’d mostly adapted to his new life. Then, Ella Quinn invaded Sanctuary turning his world upside down. The Irish spitfire was everything Koda wanted, but couldn’t have. He had to get rid of her.

Veterinarian Ella Quinn devoted her career to rehabilitating the injured, aggressive, and displaced. She never imagined her life’s calling would apply to the man who despised her on sight. Dakoda Stone’s wounded soul called to her. Despite his antagonistic attitude, she found herself falling for him. Ella had to decide if fighting for Koda was worth the heartache she’d suffer if she lost the battle.

Wolf was fed up with Koda’s obstinance and decided it was time the beast became the master. When the opportunity arose, Wolf seized it, determined to make Ella theirs. Unfortunately, the outcome he envisioned didn’t happen. Now, they may have lost her forever unless they found a way to gain Ella’s forgiveness. Or was it too little, too late?

Titles in The Shifters of Sanctuary series include:  Resisting His Irish Spitfire – His Foxy Lady – The Grizzly Bear’s Barista – A Purrfect Gift of Fate – Catching Her Wolf –

I was blown away by Resisting His Irish Spitfire – and I don’t say that often or lightly.  What an amazing story and the perfect beginning to The Shifters of Sanctuary series.  I am officially hooked for the duration.

Koda and Ella’s story is so full of emotions – frustration, anger, lust, love… but never, ever pity.  Ella is a woman who is stubborn, loyal, brave, and takes absolutely no crap from anyone, especially Koda.  Watching their interactions was like watching a heated tennis match with word weapons going across the net time and time again.  Their attraction to each other is obvious, but Koda’s stubbornness is almost as strong.  I adored his Wolf… Wolf had some of the best one liners in this story.

It would be very easy to keep talking about Resisting His Irish Spitfire, but then I’d chance letting a spoiler slip… and you should read this story for yourself and get all those juicy details firsthand.  Bottom line… I loved these characters, the story is captivating from the first page and never lets go.  It’s an addicting start to the series and now I cannot wait to discover what else will be happening in Sanctuary.  I’ve pretty much guaranteed that I’ll be doing a binge read one day this week to get caught up on this series.

If you love Shifter Romance, and a deeper, emotion based story perks up your ears… then you’re gonna love Resisting His Irish Spitfire.  I know I did.