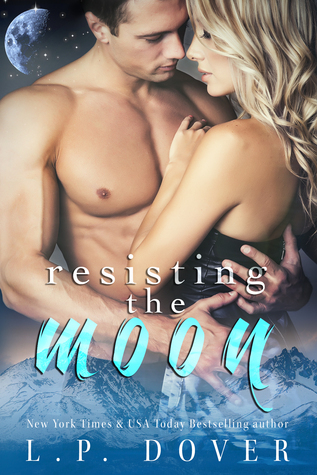 The past was pain. The present unclear. For Tyla Rand, her future couldn’t be bleaker. Death follows her everywhere, especially to those she loves. Being a member of the royal pack, she believes her time of happiness will come. That is, until wolves from her old pack show up missing. Her mission is to find them, but she won’t be going alone.

Sebastian Lyall, a true born royal and the one man Tyla’s been trying to push away, has offered to help in her quest. Their journey not only brings out their true desires, but attracts the attention of another, someone from Tyla’s past.

However, nothing is as it seems. Death is not done with her and now he wants her to pay. He won’t be satisfied until he’s taken everything away . . . including those she loves.

This story is sexual as all Shifter novels usually but Resisting the Moon also has a high level of violence in it – some scenes may be triggers for some people so along with the usual Adult 18+ reader warning that I always place here.. I have to add extreme violence and possible triggers as well.

Read on for my thoughts on Resisting The Moon.

In the second story of the Royal Shifters series we get Tyla and Sebastian’s story along with more information about many of the royals and extended families of characters we will likely meet later on in the series. We will meet up with Bailey and Ryder again, but this time around they will be secondary characters.

Tyla and Sebastian have been dancing around each other – each realizes that the other is their true mate but Tyla’s determination to not act on that fact is painful and frustrating to Sebastian.  He doesn’t understand her resistance to what each one knows is their destiny… and it is making him act in ways that aren’t helping his cause with his true mate… at all.  Tyra has faced the death of those she loved too many times, she will not risk giving her heart away again only to lose her loved one once more.  She simply will not do it – but that doesn’t stop her reactions to Sebastian or to the interest of the other women of the pack for this handsome, powerful and sexy man.  Tyra is strong willed and stubborn, and often she believes her own version of events over what is actually happening.

When a family member calls Tyra’s parents pleading for help it is decided that Tyra and Sebastian will head a mission to travel to her home and investigate and assist in any way that they can.  What they discover upon arrival is a carnage that is beyond sane, and a missing cousin/best friend who is in dire danger.  There are clues left in the home and soon Tyla will be facing her painful past once again.

I enjoyed Resisting The Moon very much – but I do have to say that the level of violence in this story did give me pause.  It made sense within the story, it was perhaps the strongest way to show just how vile and evil some of the characters were… but it is rough to read at times.

Resisting The Moon is an action packed, fast paced, suspenseful romance that will take the reader deeper into the series.  The story is detailed and the characters are very realistic.  If you’ve read the first story, Turn of the Moon, then you will enjoy stepping back into this rich world once again.  I would say that if this is the first time you’ve read any of the series you would still enjoy it, you might not get all the back story or some events that are mentioned but it would not take away from an enjoyable read, in my opinion.  There are many new characters brought into the series during this tale and I’m looking forward to learning more about them.

(Resisting The Moon was first reviewed by me on my main review site, Keeper Bookshelf – as I want all of my Shifter reviews on one site, this reviews was brought over to Shifter Haven for that purpose.  Same review, written by me cross posted to two of my own sites.)