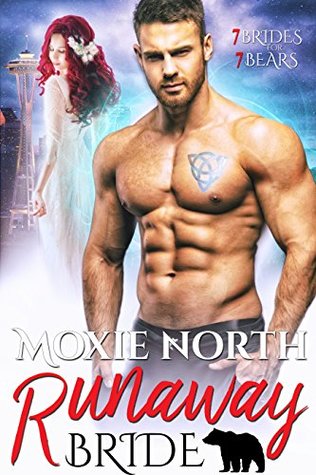 Finding a kidnapped, runaway bride was the easy part.
Realizing she is your mate who still needs protection is the hard part.

Van
A force to be reckoned with, Van of Clan Rekkr is a giant of a man with a grizzly hidden inside. Being a security specialist with King Security International gives him the excitement his life needs after leaving the military. Satisfying his desire to protect and defend, no job is too big or too small. Van stays busy with life while waiting to hear the mating call and finding the one meant for him. Some things are just beyond his control and he is at peace with that. Well, almost.

Cora
Sitting in a damp warehouse in a dirty wedding dress and held for ransom was not how this was supposed to go. Cora Butler realized she shouldn’t get married but before she could inform her ex-fiance that he was the ex-fiance, two inept kidnappers complicate the situation. When a growly but gorgeous shifter comes to her rescue she thinks all is well. That was before Van tells her she was meant to be his.

Being mate to a Kindred definitely was not in the plans.
The path of fated mates never runs smoothly, and even though Van and Cora are meant to be together, there are forces at work trying desperately to keep them apart. Van will stop at nothing to make sure that his mate is safe. No matter the cost.

Runaway Bride begins the 7 Brides for 7 Bears series, and I fell in love with the story, the main characters, the secondary characters and this world very quickly.  I have enjoyed falling into Moxie North’s worlds for years and to be frank, this time I fell hard.  You’ll find what you need to know about this story in the cover description.  What you won’t find there is the intensity, the suspense and the overpowering protectiveness of a bear who has heard his mating call and found his one, his fated mate.  The members of KSI are as alpha as you will ever find, defenders of those who need their special abilities.  And we see them all in their professional roles and in their private lives as well.  Men and women who would take a bullet for a client and will give their lives for their mate’s happiness.

I loved the idea of the “Crones” doing some matchmaking in the background, with some unique visions and ideas of how and why certain people are meant for each other.  While there is an attraction between Van and Cora there isn’t really that smack of insta-love that we’ve come to expect from Shifter Romances.  Yes, it’s implied – yet Van doesn’t know for certain that Cora is his mate until he hears his mating call.  For each Kindred that mating call is different, it could be a smell, a laugh, a kiss, a bit of sass – it varies, but each is unique to the individual and there is no doubting it once felt or heard.

There is another factor that intrigues me about these men and women of KSI – their protectiveness of their mates.  Yes, all Shifters are protective of their mates, that’s a given.  Yet these couples meet under unusual circumstances.  Their mates are already in danger of some sort and in need of the protective services of King Security International.  Beyond that, what seems like over-protectiveness is really an intense desire for their mate’s happiness and safety.  Not one of the Kindred would stop their mate from holding down a job, making their own career just as important as theirs as long as that decision brings their mate happiness then they are content, but they will be protective, that’s just part of their DNA.

The mate mark adds another level of intimacy for each couple.  The Kindred have their mark, once mated their loved one also develops a mark that is an exact duplicate of the uniquely intricate design.  By simply touching the mark, each can sense the other.  And you have to admit that with the work that the people of KSI do being able to reassure your mate of your safety by a simple touch comes in handy.

There is a lot about this new series that I’m finding fascinating… and that’s even aside from the suspenseful, sexy, intriguing story.  You noticed that I didn’t mention Van and Cora much… simple answer.  I think you need to experience these stories first hand.  They are intense with touches of danger and suspense that you should get from the story.  I can say that I loved this couple, their unique personalities blended together and set the stage for the rest of the series.  And I’m definitely looking forward to seeing how the rest of this pretty amazing group of shifters find their one, their fated mate.  I’d not hesitate to recommend this story and series to any Paranormal Romance or Shifter Romance reader.  I’m hooked, and I believe you will be, too.