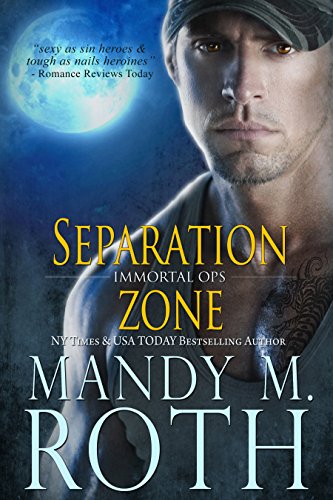 We’ve watched Jon fall deeper into depression, deeper into a dark place that he’s having real trouble getting himself out of over several previous stories.  And with each additional Immortal Ops visit, we see him getting slowly worse to the point now where he’s been ordered to take some time off.  Now, in Separation Zone, the seventh title in the Immortal Ops series we see him at rock bottom, breaking with a long-held order for all the men to not return to their original hometowns… but Jon needs to break that rule for it’s the one day a year that a massive memorial for fallen soldiers is held back home and this year he intends to be there, not certain why he’s driven to go home, but going home nonetheless.

Tori is a talented artist who lately has been obsessed with painting tigers, not her usual subject.  But this particular painting is becoming an obsession and she will get lost for hours in its creation.  Tori sees, hears, and speaks to the dead.  It’s one of the reasons she’s become somewhat of a hermit rarely leaving home as she is barraged by the dead and requests for help… which also makes her look quite crazy to the rest of the world.  The one voice she does welcome is her grandmother’s… and that sly lady is up to something, insisting that he will be returning home and to watch for him… whoever “he” is.  Tori’s learned to just go along with her grandmother’s comments but this time there is a stirring, a feeling that something is awaiting her just out of reach… that feeling would be Jon returning home and claiming his mate.

Separation Zone is a touch different from the other stories.  This one gave me a deeper emotional reaction to one of the men’s suffering, for Jon has seen and done too much over his long life for it not to have affected him.  And the recent losses tipped him over that edge.  His loneliness, his weariness, his sadness simply surrounded me in a way that my wish for his eventual happiness with Tori was a bit stronger than usual.  I adored Tori’s grandmother, her sense of humor and the way that Jon reacted to her presence gave me several chuckle moments in this one.  Tori is a strong character, stubborn as well and she’s in danger… as if just finding out her mate, after all this talk about him, finally found her isn’t enough to deal with.  I enjoyed Tori and Jon together, they simply fit.  As always, I had a blast back in this world and cannot wait to dive into the next one.

At the time of this review, I read this title through my Kindle Unlimited subscription.

Available for the Kindle (and soon other vendors as well)