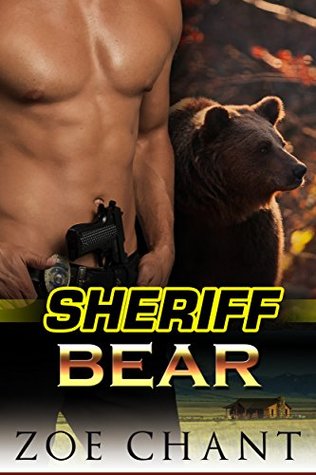 Bear shifter and small-town sheriff Axl Tanner isn’t looking for trouble or temptation when he walks into Marge’s Diner, but he discovers two things at a glance. First: the smoking hot waitress with flaming red hair and curves in all the right places is also the woman on the wanted poster back in his office. Second: she’s his mate!

Framed for a crime she didn’t commit and running from dangerous enemies, curvy Tara Malloy is waiting tables in a truck-stop diner while trying to figure out how to clear her name and get her life back. The last thing she needs is to get involved with a drop-dead-sexy sheriff and his entire bear clan. But she’s always been a sucker for a man in uniform …

Axl knows he shouldn’t fall for the sexy fugitive; Tara knows better than to fall for a cop. But flaming desire pulls them together, and Axl can’t leave his mate to face her enemies alone. Can they overcome their differences and find the love they’ve been dreaming of … or will Tara’s deadly past claim both their lives?

These Shifters may be country boys but there is nothing tame about how they love t heir mates – so it’s an 18+ reader.

Read on for my thoughts on Sheriff Bear.

The last thing Axl expected when he walked into the diner for lunch was to scent his mate across the room – or to know that she was a wanted fugitive.  Not the best introduction he could think of.  But as sheriff it’s his job to do the not so pleasant things as well so he sets out to talk to the beauty who had mine written all over her and find out exactly what kind of trouble his mate was in.

Tara has been on the run and she really needed to hang out in this small town for a bit longer in order to gather more evidence to prove her innocence – but one look at the hot sheriff stopping just inside the door and staring straight at her put that plan in the dumpster.  She tried to fake it, but that lasted long enough to hear his quiet voice asking her to come with him – so, one tossed pot of coffee and she was on the run…again.  But she had no idea that getting caught by this particular sheriff would be the best thing that could ever happen to her.

I really enjoyed Sheriff Bear, the beginning of the Bears of Pinerock County series.  Well, let’s be honest, I haven’t come across a Zoe Chant story that I haven’t enjoyed yet.  But this one is a solid foundation for the rest of the series.  The back story for Axl, his brother Alec and cousins Cody and Remy, plus Gannon… it all simply makes me want to be able to dive into this world right now – but I’m going to have to be patient and wait for the rest of the stories to emerge.

Tara and Axl’s romance is a solid story, with enough inner-clan drama, suspense and development of the secondary characters to make it truly a page turner, for me.  Tara is Axl’s mate, but instead of hauling her off to jail as she expects, he gives her the chance to explain what is happening to her and gives her the gift of believing her without question.  Her trust in him will be tested at times because she truly is terrified of what put her on the run, but she will place her life in his hands and Axl will protect her and love her through it all.

I love when characters make statements like “I’ll be a bachelor forever, tending to my nieces and nephews.”  Yeah, right – you my friend are going to get the perfect woman for you.. eventually.  Oh how I love to see the strong Alphas fall.  *grin*  Gannon, he is going to need a very special woman.  We don’t know much about him… but what we do know tells the tale of a man in need of one extremely unique woman to tend the wounds that show, and those that don’t.  I cannot wait to learn more about the men in this series.

If you love Shifters, a hot and sexy story and one that is suspenseful and keeps you turning pages then Sheriff Bear is one story you’re going to want to check out.

Alpha On The Run by Zoe Chant

Alpha On The Run by Zoe Chant