Shifters in a Bundle 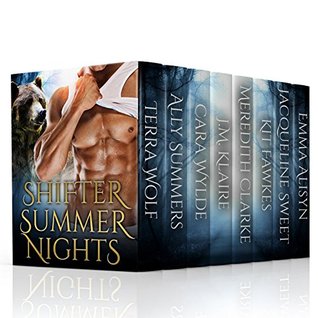 Before the Hunt by J.M. Klaire   (Alpha Hunted series prequel #0.5)

A Slice of Honeybear Pie by Jacqueline Sweet   (Bearfield series #1)

Luck of the Bear by Meredith Clarke   (Salem Shifters series #1)

As you see I’ve done the work for you and the series that these amazing novellas are part of are listed.  You’re welcome.  *grin*  Hey, it’s something that’s important to me so I figured you’d want to know, too.

Shifter Summer Nights bundle is available for a limited time – no, I don’t know how long because that’s never mentioned.  But hey at 99 cents (or available through your Kindle Unlimited) why not grab up these stories right now?  I mean really that’s like 10 cents a story – where are you gonna find a bargain like that very often?

The majority of these stories are the first in the series, one stand alone and one that is further along in a series.  Since I’m now planning on picking up all of these series to review (yeah, they were that good), I’ll be slowly adding each individual story in the Shifter Summer Nights bundle to my reviews.

I discovered some new to me authors, a few series that I didn’t know existed until I read this bundle and overall some really good stories.  Ones that made me want to continue on with the series they are a part of.  It’s an excellent bargain.  It truly is a win-win for Shifter Romance lovers.