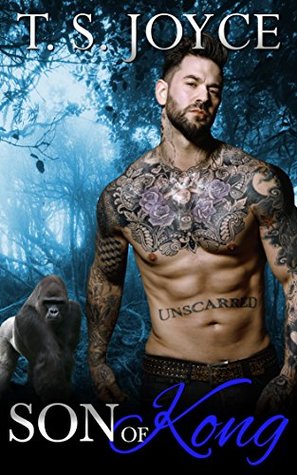 Torren Taylor has a gorilla problem. The birthmark on his back says he is supposed to be the new Kong, but he wants nothing to do with his people. Shunning their traditions means his silverback is out of control and on a one-way track to crazy-town. He accepted his shortened life a long time ago, but right now all he wants to do is live long enough to for a couple last bucket list items. When a rare beauty shows up at his door and offers to keep his animal steady for two hundred bucks a week, well, he’s mighty tempted to pay to prolong his life. Especially if it means spending time with Candace, who seems to have a knack for calming dominant men. She’s a good girl gone bad, and he wants to corrupt her even further. But something’s brewing against his crew, and drawing her in closer will put her at risk. And now Torren is torn on one important decision: be selfish and live longer, or shorten Candace’s life with the danger building around the Sons of Beasts.

Candace Sumner needs a change. She’s back in Foxburg paying off big debts and taking desperate measures to do so. She had to give up her dreams to come back to her hometown, and now she wants a break from the monotony. And maybe a friend or two wouldn’t hurt either. An offer to keep a local silverback shifter steady sounds like an adventure, but when she sees Torren for the first time, her plans at aloofness are squashed. He is the type of man who is the perfect combination of sweet and deadly that could finally make her feel safe in her life. Too bad he’s going crazy, and his crew could go down in flames at any second.

Candace wanted an adventure, but she didn’t bargain for love, betrayal, and a group of the worst-best friends a shifter like her could ask for.

Torren’s silverback is out of control, or more like in control far too often.  Like his father before him, Torren has the birthmark and the legacy of becoming “Kong” the male of a large family group… a dubious “honor” he wants nothing to do with as he hates almost all gorilla shifters.  Yet he cannot take the easy way out of his situation for he is the one tie his best friend and Alpha Vyr has to remain somewhat in control of his badass dragon.  Torren is literally being torn apart and the only way to keep control, and keep a promise is to fight anyone who will take him on.  His totally crazy, obnoxious friend Nox has a plan… it didn’t work exactly as intended, but it did bring two mates together.

Candace had once had a very good life.  All of that changed when her father became ill.  Although it’s unusual for a shifter to become sick but when they do, much like humans, the costs are beyond skyrocketing for shifters cannot have health insurance.  Now after her dad’s death, Candace is paying off loans she took out and his medical bills.  She gets an unusual job offer and while she most likely won’t take it, she’s still intrigued.  Little did she know that an invitation to dinner at a run down mansion with a horny lonely swan in the pond and some really crazy shifters would lead her to her mate.

Son of Kong is extremely fast paced… and leads us firmly into the events that will come in Son of the Dragon, Vyr’s story.  With an interesting take on the settling that mates have on each other in Candace and Torren’s story we also see how friends anchor friends, and mates solidify those connections.  I adored Candace, she’s tough and a bit crazy herself.  She might be down right now, but she’s got fire and strength that even she didn’t know about.  She will be an anchor in this crew, one that’s desperately needed.  Torren is a wounded soul, close to the edge of ever coming back again.  He and Candace fit each other so perfectly… and it’s easy to see how quickly she becomes a part of this ragtag crew.

The sacrifices and the glimpses we get at the end of Son of Kong only make me look forward to the next story even more than usual.  With unexpected development, new enemies to fight and out of control shifters, this story is intense, sexy and an amazing addition to the series that make up Damon’s Mountains Universe.  I’d recommend this story and the entire set of series to any Paranormal Romance or Shifter Romance reader.