Son of the Dragon by T. S. Joyce 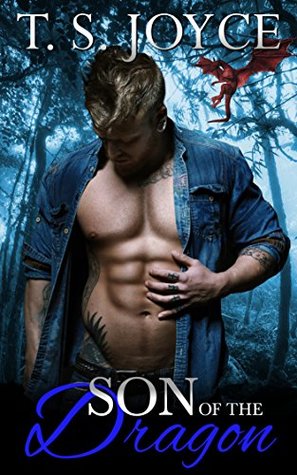 Deep in a high security shifter prison dwells the most dangerous shifter in the world. Vyr Daye is the Red Dragon, alpha to the Sons of Beasts Crew, loner, watcher, fire-breather…and he’s also completely misunderstood. The media has dragged him through the mud, his reputation is shot, and his own father helped to put him in prison for a one-year sentence. Only this prison isn’t what it seems and he’s fighting to keep his dragon alive. All he needs to do is keep steady for six more months and then he can live his life as quietly as possible with his crew, but one sexy, fast-talking prison counselor saunters in and wrecks his focus. Riyah isn’t what she seems, but no one can sense her powers besides Vyr. He’ll keep her secrets if she keeps his. And as the dragon inside of him starts losing his battle, he’ll need her help to gather his crew and pull him from the brink before it’s too late. And the more he gets to know the beguiling woman, the more he thinks she’s here for more important reasons than even he understands.

Riyah Mercer has been hired to infiltrate the shifter prison and watch Vyr’s back. He doesn’t trust her, but he doesn’t realize she is his only friend here. She can see him struggling, and can see the dragon fading. As she starts falling hard for the stoic man, she becomes determined to do anything to save him. But saving the dragon means unleashing his fire on the world, and that’s not the only danger Riyah is in. There are eyes everywhere in the prison and they are creating something monstrous down in the cell where they keep the Red Dragon. If she is caught helping the man she’s falling in love with, it could mean the end for them both.

This trilogy is connected  to the group of series that make up Damon’s Mountains.  To see all the related titles please visit the T.S. Joyce page.

I don’t have words right now.  I do have tears streaming down my face – and so many emotions that it’s hard to get past them to form writing thoughts.

I should wait to write this review but somehow after reading Vyr and Riyah’s story I believe this review needs to be raw and full of emotions, even the ones that I can’t seem to find a voice for.

If you have followed any of the series or even all the series that make up Damon’s Mountains, then Son of the Dragon is a must read.  You’ll be awed – angry – frustrated – hopeful – vindicated – fall in love all over again – and finally satisfied.  If I could give Vyr’s story a 500 star rating I would, but I have to be content with a 5+.

There were moments when I was totally chilled with goosebumps, and moments that reminded me why I’ve followed and loved every single adventure of these amazing groups of shifters.  If I say anything about this story I’ll end up giving away spoilers without meaning to… so I’ll simply say that this one had absolutely everything I needed.  If this is the end of the tales from Damon’s Mountains then I’ll be content having known and loved a massive group of shifters and had gratefully taken a part in their lives.

Thank you, T. S. Joyce for sharing your imagination with us… and for bringing me to tears.