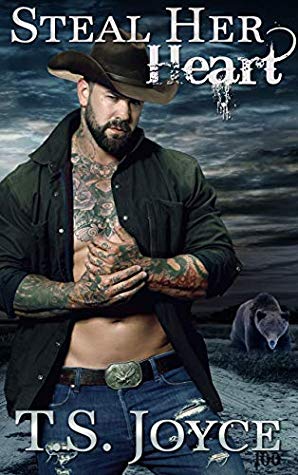 Maris Thurgood is in deep trouble. Abandoned to care for a ranch on her own, she’s struggling from sunup to sundown to keep up with the work. When a pack of werewolves begins preying on her herd, she has no choice but to sell. A chance meeting at the cattle auction has her wondering why someone as tall, dark, and growly as Bryson Locke would take any interest in a business venture with her. He’s got one rule for her, and that is to never go outside past sundown while he’s hunting the wolves. But what she starts realizing about him…Bryson Locke is much more dangerous than the pack of predators that are hunting her.

Bryson didn’t get to be the Ranch Manager at the Kaid Brother’s Ranch by accident. He has a certain set of skills that allows him to protect the massive herd from predators. For a couple of years now, he’s been spinning his wheels and looking for a purpose, and one lands right in his lap in the form of the beautiful, curvy, spitfire who has trouble written all over her. Why would a pack of werewolves terrorize this woman? And more importantly, why does he care so much? Pride is everything for a rancher, and Maris has it in excess. She has her guard up and has obviously been hurt before, but the more he gets to know of her, the more he wants to find out why she’s being targeted by the wolves…and that answer might get them both killed.

Titles in the Kaid Ranch Shifters series include – Steal Her Heart – Make Her New (Jan. 2020) –

STEAL HER HEART is the opening story in the Kaid Ranch Shifters series — and this one will draw you in from the very first words.  Remind me to stop thinking that T. S.  Joyce has given her best story yet because every single time she ups her game and delivers even more… and I hope that never ends.

As a long-time reader (and lover of this author’s worlds) I’m constantly on the lookout for her signature numbers to appear in every book.  And when I find ten-ten (10 10) there’s a big ole grin that covers my face every time.  Why?  Probably because it’s become a hunt for it to show up, and partly in respect for something that obviously means something special to the author for it to show up so consistently – and because I love the connection to the other worlds that 1010 gives us all.  And, yep, there it is and that grin did appear once more.

Maris is the type of heroine that I can always identify with and root for.  She’s been done wrong, so very wrong by her ex-husband – and I must admit that I did a few fist pumps when Dallas got what’s due that scum bucket.  She’s lost her world, or so she believes and is struggling with running her small ranch single-handedly, growing deeper in debt every day thanks to the actions of said scumbag ex.  She’s almost given up when she’s ready to sell her herd at auction.  But that decision will become the best one she’s made in years for it will put her right in the path of the right man for her… Bryson.

I loved Maris.  She’s beaten down but still can come up with an attitude when needed.  She’s rough around the edges, doesn’t hold back what she’s thinking, and is as stubborn as the day is long.  Watching her grow throughout her time with Bryson was emotionally satisfying because the stronger she became the more Bryson let go of some of his past.  He knows what she is to him, but her healing and her discovery of that fact totally on her own is more important to him than charging and claiming his mate.  When the time is right she’ll know what he already accepted.

The action is fast-paced and vivid as we meet up with some truly vile enemies who will do so much to change the lives of those they touch with their poisonous evilness.  They are enemies to loathe on principle alone add in their actions and – yeah, hate is such a weak word sometimes.  I loved meeting Hunter and Wes, those rambunctious brothers with attitude beyond belief, and cannot wait to learn their stories.

I was captured once more by STEAL HER HEART and would highly recommend this story to any Paranormal Romance or Shifter Romance reader.  I will definitely be on pins and needles waiting for Hunter’s story.