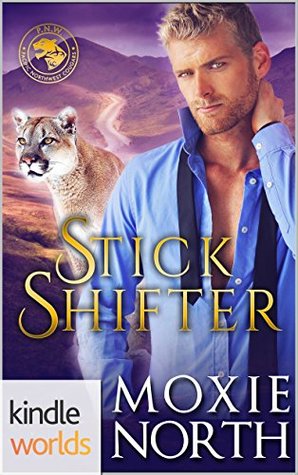 One sexy cougar …
Millionaire Will Klein loves his life in Las Vegas — but he also loves the road trips that give his cougar room to shift and roam. In all his travels, though, he’s never met his mate … until his car breaks down somewhere on the back roads of Tennessee, and a pretty, dark-haired woman starts wielding her wrench.

One curvy mechanic …
Delaney (D.J.) Owens has lived her whole life in the same small Tennessee town. She’s never met anyone like the sexy, sophisticated casino owner whose car she’s fixing — especially when she finds out he’s not exactly human.

And a cross-country dilemma …
Now that he’s finally found his mate, Will wants to take her home with him and pamper her as only a millionaire can. But can he persuade his small-town tomboy to take a chance on the big city life of Las Vegas? And if she does, will she be welcome in his world?

Read on for my thoughts on Stick Shifter.

I will freely admit to anxiously awaiting Will Klein’s story – and I certainly wasn’t disappointed, even if it seemed I waited forever.  *grin*  We last ran into Will in his sister Layla story in Cougar’s Luck and I think I fell a bit in love with him right then.

Will has taken some time off from running the family’s casino / hotel in Las Vegas.  He’s on a riding trip with some of the club members in the mountains of Tennessee with some spectacular scenery and amazing curvy roads that test everyone’s driving abilities.  When his car breaks down during one of those rides, Will is left to the fate of whatever local mechanics he can find.  Yes, he could fly in his own mechanic or even work on the car himself, but as long as it’s not a big deal he’ll have it worked on locally – under his eagle eyes of course.

He knew he’d find her one day, he simply wasn’t expecting to find her under the bonnet of his classic car.  Delaney was everything he could have wished for, small but not tiny, curvy in all the right places and smart.  She could banter with him easily and it wasn’t a hardship to imagine the amazing life they could have together.  His cougar was all Mine, Mate.  Don’t you see her!  But Will wasn’t about to scare his mate off so he calmed his cougar with promises of soon enough, just be patient we’ve found her at last.

Stick Shifter was pretty much everything I expected and hoped for in Will’s story.  This is a successful man, one who knows his mind and has the maturity and sense to be patient when warranted and straightforward when necessary.  There is no angst, no drama in Will and Delaney’s romance, it’s as close to an old fashioned love story as you’re gonna get in the sexy shifter world.  Delaney’s grown up in a tiny town in the mountains of Tennessee, she’s well aware of the stories people tell, that there is more to nature than meets the eye.  Perhaps she never expected to come face to face with a man who also turns into a cougar but she handles it with grace and excitement.  Will swore to never lie to his mate, so he calmly, lovingly and yes, with pure sexiness created a game that allowed her to ask her questions and he’d answer honestly, for a price of course.  It is telling that Delaney knows the right questions to ask that lead to Will explaining his cougar

I absolutely loved this story.  Oh, I’m all for the high drama, complex plots with unexpected twists and turns.  But sometimes a uniquely simple old fashioned love story set in the magic of a shifter’s world is just such a special treat – how can you not fall in love with it.  Boring?  With a man who has mastered secy talk like Will Klein has?  Oh, Please.. no, not boring – satisfying in the extreme.