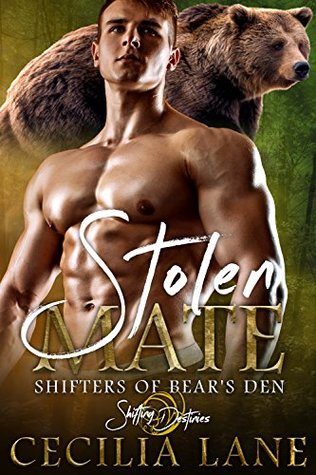 Take one protective, growly shifter.
Add his fated mate, a sassy woman who awakens his bear.
Stir in a marriage of convenience, a remote cabin in the woods and let simmer…

Everly Mather’s very terrible, no-good day is fixing to get a whole lot worse. To start off, her alpha announces he wants to mate with her, to produce an heir. When she gives him an emphatic nope, her guardians take her for a drive and abandon her on the side of a desolate road.

The long hike home is punishment for her defiance.

Her bad day takes another downturn when a big, hulking bear shifter stops for a friendly game of twenty questions. He seems to think she needs rescuing. He’s all kind of mad and snarling on account of her pride dumping her in the middle of nowhere.

He refuses to mind his own business.

And refuses to go away.

When she insists she’s just fine without his help, thank you very much, Mr. Growly McBossy tosses her into his truck and hauls her out to his cabin in the woods. If her jaguar pride cast her aside they don’t deserve a fine little thing like her. He announces his plans to keep her.

Yeah, that all goes right out the window the moment he finds the pretty little blonde on the deserted road. Everly’s lovely hazel eyes and sweet curves awaken his bear along with a whole lot of protective instincts. She doesn’t want his help?

She’s getting it anyway. There’s no way he’ll leave a vulnerable, albeit sassy, woman out in the middle of nowhere.

Especially when said female is his mate.

Instead of returning her to her people, he carries her off to his cabin. His hospitality doesn’t exactly win her over. Even after a few days, circling each other in tight quarters, she’s still a tad miffed over the whole deal.

After a little time, she’ll come around. He’s sure.

But what comes around instead is her pack alpha, spouting all sorts of nonsense about mating with Everly. Not happening. Sawyer’s ready to give the big cat shifter a beat down. He’s furious that Everly was left behind by her pride members. Also, she belongs to him. There’s that too. Just when things are about to get interesting, Everly surprises both men.

Sawyer knows he can protect his woman with a marriage of convenience.

Even if his possessive bear demands to claim his sweet, fiery mate.

“Stolen Mate” is the fifth story in the Shifters of Bear’s Den series, which is part of the Shifting Destinies world.  All of the titles in these series which make up their own world can be found on the Cecilia Lane page.

“Stolen Mate” captured my attention from the first page and never let go until the ending.  It’s intense with more than a few puzzles tossed in as well.  This is the fifth title in Cecilia Lane’s Shifters of Bear’s Den series, and it moves the overarching story of the enclave and its residents very well with lots of action and involvement from all the characters we already know… and a few new faces.

This cover description tells you just about everything you’d need to know before picking up this story.. in fact, it’s more than I’d put in a review.  *grin*  I would call Sawyer’s and Everly’s romance a compelling story, and that’s not a word I use often.  It seems there are as many sins among the various supernaturals as there are among the humans for Everly comes from a jaguar pride that is headed by an insane, power-hungry jerk of an Alpha who rules his pride through fear and depravity.  As a nomadic pride moving from campground to town in an RV caravan, this pride is also on the edge of some very dangerous activities, ones that have and will get other supernatural beings, shifters killed simply for being different.  The women of Everly’s pride are useful to the males for baby making, sex, cleaning up and punching bags — and that is all they’re good for in the eyes of the males.  When Everly is faced with the demand that she become her alpha’s second mate, alongside her sister, since he is heir-less and she is a rare jaguar with an unusual coat… and because Wade decrees it.  Her automatic rejection and smart mouth get her in trouble immediately, and egged on by Wade she is mistreated by the members of her pride.  Which is where and how Sawyer found her… and scented his mate for the first time.

There are, of course, steamy moments, lots of fast-paced action, dangers to be faced… but what drew me into the heart of “Stolen Mate” was Everly’s reactions to what normal actually was for Sawyer’s clan.  The women had a voice, they weren’t backhanded for a smart comment, they were treasured and respected — all things she had no experience with, and rejected automatically as weak.  Watching her eyes be opened to the possibilities of a good life lived without fear was an amazing journey to share with this character.  Choosing Sawyer and his clan as her future put them all in the crosshairs of Wade’s anger and vengeance, and makes for a very powerful story that I would not hesitate to recommend to any Paranormal Romance or Shifter Romance reader.